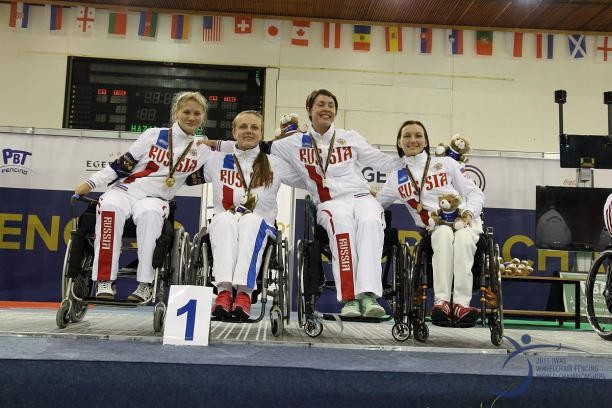 Russia and Ukraine each scooped gold on the final day of action at the Wheelchair Fencing World Championships in Eger, triumphing in the respective men's sabre and women's epee events.

In the opening round of women’s team competition at the International Wheelchair and Amputee Sports Federation event in the Hungarian city, the Russian squad of Viktoria Boykova, Yuliya Efimova and Alena Evdokimova swept aside Greece 45-10 to set up a semi-final against the host nation.

Despite strong home support, the Russians were far too strong in running out 45-17 winners.

A far tougher final then followed, however, as Hong Kong took a slender 10-8 lead after Yu Chui Yee beat Boykova.

But Evdokimova opened clear daylight in the third contest, outhitting Yui Chong Chan 7-1 to put the favourites 15-11 lead, before they continue to press home their advantage in a 45-37 victory.

Hungary hit back to take bronze with a 45-32 win over Poland.

Ukraine's men were just as dominant as the Russian women in the sabre team event, opening up with a 45-12 win over Malaysia before hammering Russia 45-19 in the semi-finals.

Their final opponents Italy had been equally as impressive in defeating Georgia and France, but the Ukrainian trio of Anton Datsko, Andrri Demchuk and Vadym Tsedriwere too strong, winning all nine match-ups to secure a 45-18 win.

Russia beat Hong Kong 45-25 to continue a strong day and take the bronze.

It ended a golden Championships for the Russians, with the highlight being double gold for Alexander Lugotenko in the category C individual events.