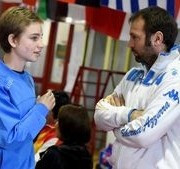 Italian wheelchair fencer Beatrice Vio has been named the International Paralympic Committee (IPC) Allianz Athlete of the Month for October after winning her seventh straight major event at the World Cup in Paris.

The 18-year-old won gold in the women’s foil category B at the International Wheelchair and Amputee Sports Federation (IWAS) event, drawing her closer to an undefeated season with one more World Cup left next month in Sharjah, the United Arab Emirates.

Vio collected 78 per cent of the votes, while Germany's Markus Rehm, winner of the T44 long jump at last month’s IPC Athletics World Championships in Doha with a leap of 8.40 metres, came second in the poll with 16 per cent.

He was followed by the United States’ Richard Browne, who received three per cent of the vote after winning both the T44 100m and 200m in Qatar's capital, breaking both world records in the process.

Cuba’s visually impaired sprinter Omara Durand finished fourth with two per cent having set a hat-trick of world records on her way to winning the T12 100m, 200m and 400m titles in Doha.

The Chinese women’s wheelchair basketball team, nominated collectively after winning the Asia/Oceania Championships with a 59-43 win over Australia, ended up fifth with one per cent.

The winner of the IPC Allianz Athlete of the Month for September was Israeli rower Moran Samuel after success at the World Rowing Championships in Aiguebelette, France.

The 33-year-old went one better than the silver medal she won at last year's Championships when she triumphed in the women's AS single sculls final.

Nominations for the award are decided after submissions by National Paralympic Committees and International Federations, before the public votes on the IPC's website.