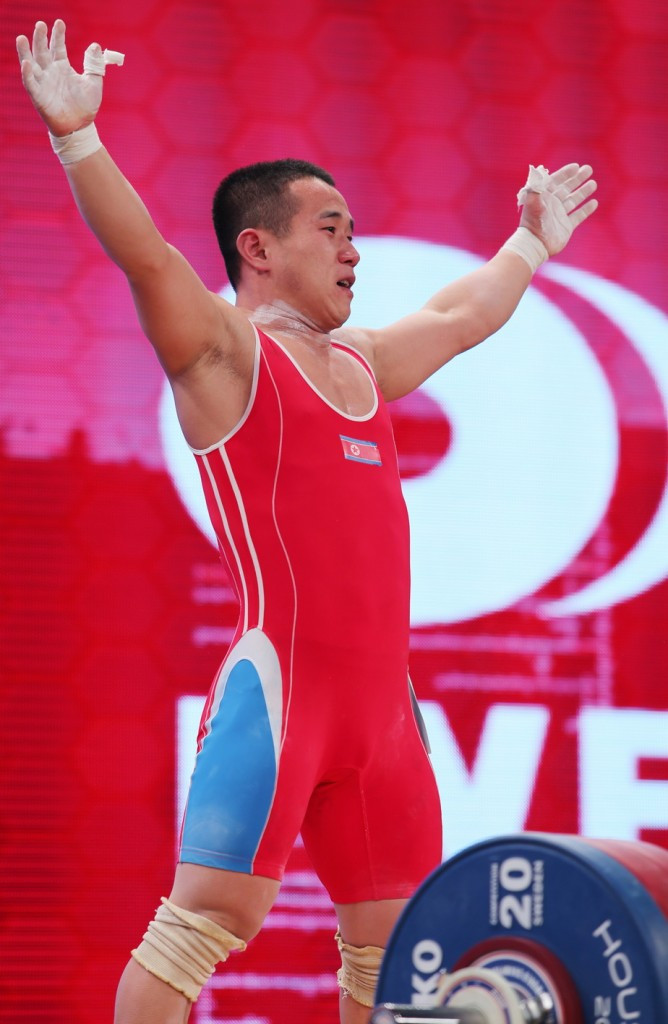 The London 2012 Olympic champion lifted 171kg, emulating the 170kg he managed at last year’s Asian Games in Incheon, to draw level with China’s Jingbiao Wu on a total of 302kg and win through a body weight tiebreaker.

Om attempted 175kg thereafter in a bid to break the world record once more, but despite failing to hit the mark, it didn’t take the shine off what was a superb display of strength.

The 24-year-old subsequently became the first lifter since Turkey’s Halil Mutlu to claim clean and jerk or overall world gold in three consecutive editions of the World Championships.

But despite his success on both the world and Olympic stage, Om said he still ranks his gold medal at the 2014 Asian Games as the one important to him.

"When I returned to North Korea from the Asian Games with the gold medal, I was welcomed by our Supreme Leader Kim Jong-un and I had a very memorable chat with him," said Om.

"So I’m so proud of my gold medal from the Asian Games which cannot be compared with other medals."

Wu had earlier won the snatch with a lift of 135kg, before stepping up again to go one better than Mutlu’s 14-year-old world record of 138kg.

The overall bronze medal went to Vietnam’s Kim Tuan Thach with a total of 287kg, while Wu and the Philippines’ Nestor Colonia completed the clean and jerk podium with 163kg and 158kg respectively.

As for the snatch, Kazakhstan’s Arli Chontey was the runner-up with 132kg ahead of Om on 131kg.

Meanwhile in the women’s 48kg, China’s Huihua Jiang came away with the overall title after winning the snatch with an 88kg lift and coming second in the clean and jerk with 110kg following a body weight tiebreaker with North Korea’s Song Gum Ri.

The 17-year-old’s total of 198kg edged out Vietnam’s Thi Huyen Vuong, who collated 194kg to finish second, and Japan’s Hiromi Miyake, the bronze medallist with 193kg.

Despite being the youngest competitor in Group A, the Nanjing 2014 Youth Olympic Games gold medallist did just enough to add to her snatch and overall junior world titles.

"I have to thank my coaches who have helped me a lot due to their hard training programmes," said Jiang when asked what she puts her triumphs at such an early age down to.

"Coaching myself has also contributed and that is the reason for my success."

Vuong took the bronze medal in the clean and jerk with 109kg, having won silver in the snatch ahead of Miyake.

Earlier in the day, the men's 62kg and women's 53kg C classes took place with Mexico's Antonio Vazquez Mendez totalling 283kg to top the former, and South Korea's Jin Hee Yoon putting together 188kg to overcome her rivals in the latter.

There was also action in the men's 62kg and women's 53kg B classes this evening as Japan's Yoichi Itokazu and Kanae Yagi set the standards with 294kg and 191kg respectively.