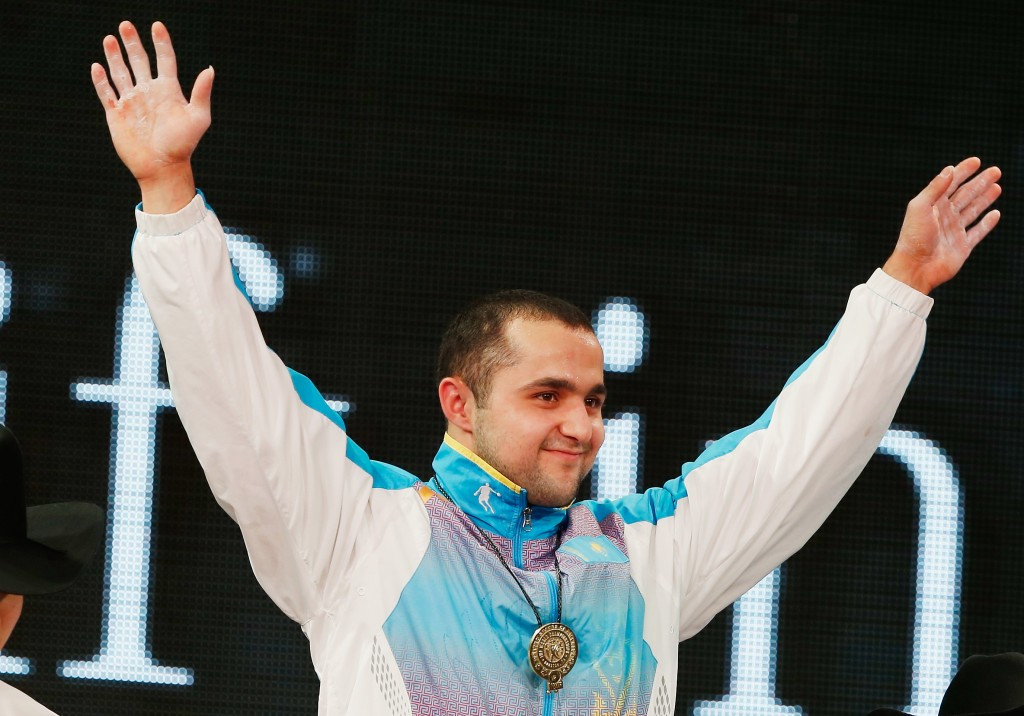 Kazakhstan’s Nijat Rahimov took advantage of the failure of China’s Xiaojun Lü to lift in the clean and jerk to claim double gold in the men’s 77 kilogram category on a dramatic day at the International Weightlifting Federation (IWF) World Championships here.

The Azerbaijani-born Rahimov registered 165kg to finish fourth in the snatch, won by the Olympic gold medallist and three-time world champion Lü with 175kg, and then made a winning lift of 207kg in the clean and jerk to earn an unrivalled overall total of 372kg.

North Korea’s Kwang Song Kim managed the same total, but had to settle for silver after losing out on a body weight tiebreaker.

It was the third consecutive Championships he had won a medal having also taken silver at Wroclaw in 2013 and bronze at Almaty last year.

Completing the overall podium was Egypt’s Youssef Ahmed Mahmoud Mohamed Ihab, who amassed an African record-breaking total of 363kg after posting 162kg in the snatch and 201kg in the clean and jerk, also both continental highs.

The snatch silver medal went the way of Kim with 171kg, while Armenia’s Andranik Karapetyan finished third with 167kg.

Following Rahimov onto the clean and jerk podium was surprise runner-up Elkhan Aligulizada of Azerbaijan, who lifted 203kg in yesterday’s B class, and Mohamed Ihab, the bronze medallist on a body weight tiebreaker ahead of Kim.

Rahimov failed in his efforts to break the clean and jerk world record of 210kg, held by Russia’s Oleg Perepetchenov, after no lifting at 211kg.

The 22-year-old, who won gold for Azerbaijan at the 2010 Summer Youth Olympics in Singapore, admitted he was "a bit too relaxed" ahead of the lift.

He only recently reverted to competing for Kazakhstan and claimed after his win that he took the decision due to the better standard of coaching in the country.

Rahimov's world record attempt came after Lü had missed the opportunity to break his own snatch world record of 176kg, having no lifted at 177kg.

It signalled the start of an incredible downturn in his fortunes as he failed on all three of his clean and jerk attempts at 201kg.

Despite ultimately suffering disappointment, Lü's gold in the snatch extends his record haul in the category to nine and overall number of medals to 13.

As for the women's 63kg C, Cuba's Marina de la Caridad Rodriguez Mitjan set the benchmark with a total of 201kg.

Following the men's 77kg A class, Italy's Antonino Pizzolato led the way in the men's 85kg B with 363kg, while Canada's Marie-Josee Ares-Pilon was the strongest performer in the women's 69kg D with 209kg.