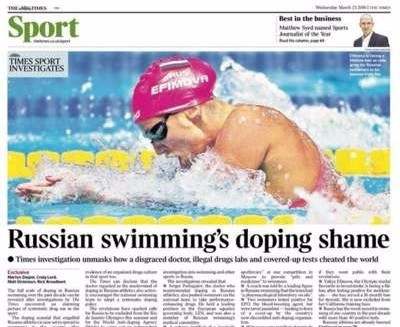 Reports of Sergei Portugalov’s involvement in alleged systematic doping within Russian swimming have been described as “concerning” by the World Anti-Doping Agency (WADA), who have written to the International Swimming Federation (FINA) following claims made in The Times.

The news dragged Russian sport further into crisis after an investigation by the British newspaper uncovered fresh accusations of a doping programme in Russian sport.

According to The Times, Portugalov, the doctor allegedly behind the doping programme in athletics, has been encouraging swimmers in Russia to take banned substances.

It is also claimed that two swimmers returned positive tests for erythropoietin (EPO), the blood-booster at the centre of the doping storm in cycling, but their results were covered up by the Russian Anti-Doping Agency (RUSADA).

WADA have claimed they will "make an informed decision as to what form of inquiry is needed and who will conduct it" in a statement released today.

"The World Anti-Doping Agency (WADA) is aware of the claims that appeared in today’s The Times newspaper that suggested “systematic drug use” in Russian swimming," it read.

"These suggestions are of concern to WADA and its partners in the anti-doping movement; and, arrive at a time when trust in clean sport is already in a perilous state.

"WADA will follow up by examining information provided by its Independent Commission which would corroborate The Times reports.

"On the basis of this, and potential information from other sources, WADA will make a decision regarding what level of inquiry is needed.

"In particular, we are concerned by the allegations that Mr. Sergei Portugalov - who is currently facing a lifetime ban from working in athletics due to the Commission’s findings - may be working in swimming.

"It should be noted that, under the World Anti-Doping Code, such a lifetime sanction should also be recognized by all other International Sport Federations (IFs)."

More than 20 Russian swimmers have failed drugs tests since 2009, with four-time world champion Yuliya Efimova the most high-profile recent case after she tested positive for meldonium, a product only added to the WADA banned list on January 1.

The 23-year-old claims to have taken meldonium for medical reasons and still hopes to compete at Rio 2016.

She has already served a 16-month ban for doping having failed for banned steroid DHEA in 2013 and is facing a lengthy suspension.

Portugalov was accused of supplying banned substances to athletes as well as covering up failed tests in the WADA Independent Commission reports into doping within Russian athletics, which led to the International Association of Athletics Federations (IAAF) suspending the All-Russia Athletic Federation (ARAF) last November.

If the ban is not lifted, when the IAAF review the decision at its next Council meeting in May, Russian athletes will not be able to compete at Rio 2016.

The RUSADA was also declared non-compliant by WADA following the reports.

The reports in the British newspaper have prompted fresh calls for WADA to spread the scope of its investigation further than just Russian athletics.

"There is no doubt that today’s disturbing assertions of orchestrated doping in Russian swimming should be scrutinised,” WADA President Craig Reedie said.

"WADA and its partners are under no illusions about the challenges facing sport’s integrity today.

"Clean athletes are justifiably concerned that their rights are being eroded through the minority that choose to dope in sport.

“As a result of information and evidence collected, WADA will make an informed decision as to what form of inquiry is needed and who will conduct it.”

The news provides the latest blow to a country which remains embroiled in a doping scandal following five-time Grand Slam champion Maria Sharapova revealing she had failed a test for meldonium, a heart attack drug, sparking a wave of reports of other positive tests for the substance from Russian athletes.

The International Swimming Federation, who controversially awarded Vladimir Putin its FINA Order in 2014, claimed they did not believe there was any evidence of state-supported doping in Russia.

"We have called on The Times to share with us any information they may have which might assist us in our primary objective of protecting clean athletes in swimming.

"Any new allegations of doping in our sport, which are substantiated by evidence and which have not already been addressed, will be investigated as a matter of utmost urgency, because we have absolutely zero tolerance for the use of performance-enhancing substances in swimming.

"However, it should be noted that while FINA is not aware of any concrete evidence of systemic doping in Russian swimming, we have taken a particularly robust approach to our anti-doping procedures in relation to Russia and Russian competitions, in light of WADA’s recent investigation."