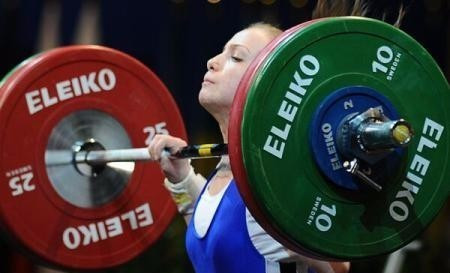 Cristina Iovu, a 23-year-old who won an Olympic medal for Moldova, then tested positive while competing for Azerbaijan, made her first appearance for Romania and won gold on the second day of the European Weightlifting Championships here today.

The men’s event, the 62 kilograms, was won by Hursit Atak of Turkey, who made up a seven kilogram  deficit in the snatch to win easily.

That made it two gold medals in the first two days for Turkey.

Iovu won the women’s 53kg by an eight kilogram margin from Iulia Paratova, of Ukraine.

Iovu, whose family are of Romanian heritage, was born in Moldova and won a bronze medal for them at London Olympics.

She then switched to Azerbaijan, a nation that regularly gives passports to potential Olympic medallists from other nations, and rewards them handsomely.

The decision backfired for Iovu when she tested positive at the 2013 World Championships in Wroclaw in Poland.

In that year 18 Azerbaijan lifters were sanctioned for doping offences.

Iovu was banned for two years until last summer and has returned to action for Romania, where she has held citizenship since 2012.

She did not make her first clean and jerk lift until her nine rivals had all finished.

Koha is benefiting from a special working relationship and development programme between the Latvian and Italian Federations, and will attend a pre-Olympic training camp in Italy.

The top two Latvian coaches, Eduards Andruskevics and Viktors Scerbatihs - a five-times European champion who also won a world title and two Olympic medals at over 105kg - do a lot of scientific and technical work in Rome for the European Weightlifting Federation.

This has led to the Latvian team doing much of their preparation work in Italy, where they will have a pre-Olympic training camp.

“We hold multi-nation training camps in Europe, in the north, central Europe and the south,” said Andruskevics.

“It’s all part of our development programme and we work on the technical side.”

Koha has dreamed of making an Olympic appearance since she took up weightlifting, aged 12.

She should make it to Rio 2016, and will have confirmation in June.

“I like sport, of course, plus Latvian and maths.

"But I don’t plan to continue my studies after 12th grade, because training will be more important.

“My father is a powerlifter and I used to go to the gym with him for fun.

"Once I tried weightlifting with a friend, and I loved it.

"My friend gave up and she is studying now.

"I will keep going.”

Koha finished second in the snatch behind Paratova, with Iovu third.

In the clean and jerk Koha was third behind Iovu and Turkey’s Sema Arcaturk, who finished fourth overall.

In the men’s 62kg Atak, 24, a European bronze medallist five years ago, was down in fifth place after the snatch, in which he failed with his second and third lifts.

In the clean and jerk Atak made three good lifts and left his rivals in his wake.

After Sibel Ozkan’s win in the women’s 48kg yesterday, the first day of competition, Turkey came close to having two men on the podium.

Erol Bilgin, who made the best snatch lift of 133kg, finished fourth overall.

The overall silver medal went to Feliks Khalibekov, of Russia, who was also second in the snatch.

The overall bronze medal was won by Vladimir Urumov, of Bulgaria, who was third in the snatch and second in the clean and jerk, 11kg behind Atak.

While most nations at the European Championships are chasing Olympic qualification points, Bulgaria cannot compete in Rio de Janeiro in August.

Eleven of their lifters tested positive at a training camp in March, 2015, and the International Weightlifting Federation later barred them from the Olympics.

An appeal by Bulgaria to the Court of Arbitration in Sport failed, though a $500,000 fine was overturned.

The ban does not affect other events, so Bulgaria competed at the World Championships in Houston in Texas, last November and have a team of 12 young lifters at the European Championships.

He looked impressive in posting a total of 269kg for seventh place.