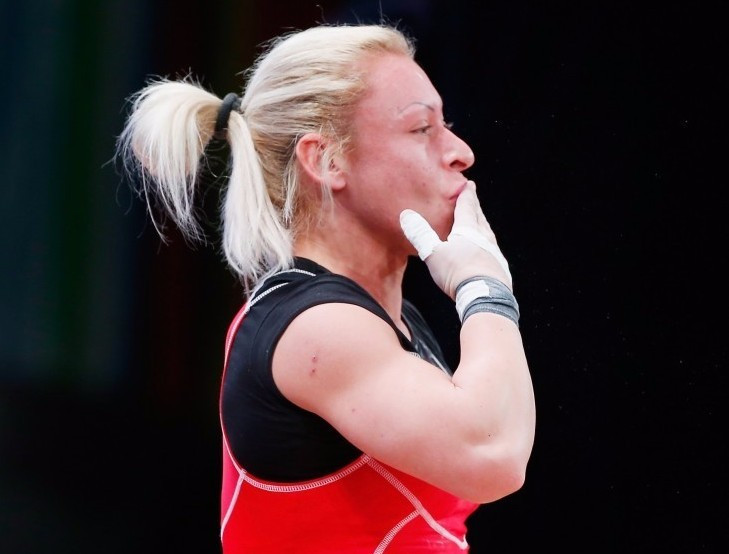 Boyanka Kostova, the Bulgarian superstar of world weightlifting, left her rivals a long way behind when she won a gold medal for her adopted nation, Azerbaijan, at the European Championships here tonight.

She can also expect another big financial reward, and if she wins Olympic gold in Rio de Janeiro in August she will be well on the way to becoming a weightlifting millionaire.

Another Olympic hopeful, the improving Aliyar Ismayilov, made it three golds in three days for Turkey when he won the men’s 69kg.

He, too, has switched nationalities.

Ismayilov was 13th in the London Olympics for Turkmenistan, where he was born.

Since switching to Turkey last year he has already won two European titles and a World Championships bronze.

Another record was set when Noel Nagy, from Hungary, made his international debut in the Men’s 77kg C Group.

He is 46 and is the oldest competitor in the history of the Championships.

Kostova, 22, was the International Weightlifting Federation’s female athlete of the year after she set two world records on her way to victory in the 58kg at the World Championships in Houston, Texas in November.

She followed up by winning the European title for a third time today.

Kostova made it look embarrassingly easy: she did not bother with her sixth lift after posting a total of 235kg, which was 30kg better than her nearest rival, Irina Lepsa, of Romania.

Poland’s Joanna Lochowska was delighted with her bronze medal on 204kg, having failed with her first two lifts.

“My training and preparation for this Championships went well and I was pleased today,” said Boyanka.

“If all goes well, and I am in my best form at the Olympics, maybe I will try for another world record.”

When Kostova had won gold at the 2010 Youth Olympic Games for her native Bulgaria, at the age of 17, she was offered a “transfer” to Azerbaijan, along with another top teenager, Valentin Hristov.

After a period of haggling over their “transfer fee” the Azerbaijanis paid $550,000 (£385,000/€483,000) to the Bulgarian Federation, who said they would spend it on helping their clubs and preparing the national team.

Hristov became Azerbaijan’s first Olympic medallist in the sport when he won a bronze at London 2012, at the age of 18.

But he has since twice tested positive, the second time coming at the World Championships in Houston last November, two months after his previous ban expired.

If his appeal for leniency fails he will be banned for life.

Bulgaria’s entire weightlifting team is banned from Rio after 11 of their athletes tested positive at a training camp last year.

Azerbaijan, too, could lose a quota place because of positive tests in 2015.

That will not affect Kostova, who goes to Brazil as favourite.

In Houston she broke the world record in the snatch (112kg) and total (252kg), but she lifted well within herself in Forde.

Her first snatch attempt at 95kg, which she made look ridiculously easy, was 2kg better than any of her nine rivals but 14kg lower than her opening effort in Houston.

After lifting 130kg with her second clean & jerk attempt she called it a day.

The clean & jerk finishing order was the same as the total, while in the snatch first and third were identical, with Ukraine’s Veronika Ivasiuk second.

Azerbaijan offers fast-track nationalisation to athletes in a range of sports, among them Russian gymnasts, American and Canadian ice skaters and the Bulgarian weightlifters.

They pay huge rewards for medals.

The last published list was for the first European Games, hosted by Azerbaijan in the capital city, Baku, last June. According to the state news agency gold medallists were paid 150,000 Manats ($143,000 at the time) with lesser sums going to those who won silver and bronze, and about half as much to their coaches.

Unfortunately for Boyanka weightlifting was not on the schedule.

In the day’s other medal event, the men’s 69kg, Ismayilov was also an easy winner.

He did not start his snatch attempts until his 10 rivals had finished their lifts, coming in at 150kg.

He went to 155kg, then just failed with his third attempt at 161kg, which would have been his best in a major championship.

His one good clean & jerk of 178kg gave him a total of 333kg, which put him well clear of silver-medallist Sergei Petrov, of Russia (322).

Because of so many failed lifts by medal contenders, the bronze went to a B Group lifter, David Sanchez Lopez, of Spain.

When Armenia’s Vanik Avetisyan, the clean and jerk bronze medallist, failed with his third attempt, which would have put him in third place overall, there was wild cheering from the noisy Spanish contingent in the audience.

Briken Calja, of Albania, was third in the snatch but failed with all three attempts in the clean & jerk.

Turkey’s other winners so far were Sibel Ozkan in the women’s 48kg and Hursit Atak in the men’s 62kg.