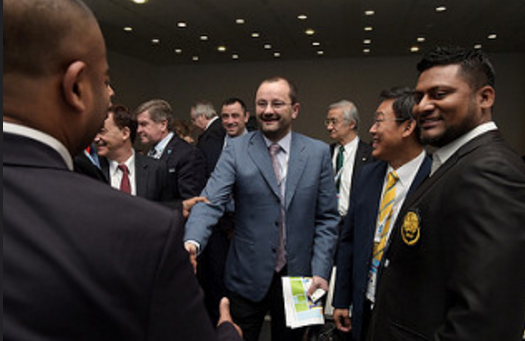 All SportAccord members are set to be eligible to vote in the election on Friday (April 22) to select a new President of the organisation as rival candidates Patrick Baumann and Anna Arzhanova step up their efforts to lobby voters here.

The race, which comes after a tumultuous year for SportAccord since the resignation of former head Marius Vizer last May, has been relatively low key so far but was the source of more discussion today as the SportAccord Convention officially got underway with an Opening Ceremony.

This follows reluctance from some members to pay their membership fees and confirm their participation over recent weeks amid concerns over the future role of SportAccord.

insidethegames was told this morning that 87 of the 89 members had paid their subscription fees and were thus eligible to cast their vote during the General Assembly in two days time.

But both the International Boxing Association and the International Volleyball Federation - the two exceptions - subsequently said that they had now paid, and they are thus expected to be cleared to vote in time.

Four other summer Olympic Federations - representing athletics, golf, rowing and shooting - withdrew last year and are yet to return.

They are permitted to attend the General Assembly only with observer status.

It is also still possible that several Federations will be absent despite being eligible to vote.

Indications are that Baumann, the Swiss International Basketball Federation secretary general who is also a member of the International Olympic Committee (IOC), is heading for a comfortable victory after making enough inroads into the non-Olympic sports which constitute 57 of the members.

His sole opponent Arzhanova, the Russian World Underwater Federation (CMAS) President, is thought to be campaigning well, however, and cannot be completely discounted.

The IOC worked hard behind the scenes to orchestrate the removal of Vizer and are thought to be keen to avoid the election of someone who shares his rival vision.

Arzhanova is working hard to show how she would not be a threat to the IOC, vowing to partner with the new Olympic TV Channel to showcase SportAccord-organised multi-sport Games.

She is also enjoying an impressive reach beyond the sporting community, claiming to have reached 27,000 people on her dedicated Facebook page.

But she is still widely seen as the less IOC-favoured candidate and a member of the Vizer camp, even if Vizer himself is not playing an obvious role in her campaign.

Baumann, also the current SportAccord treasurer and a Council member of the Association of Summer Olympic International Federations (ASOIF), is seen as a more moderate candidate who would push for a merger with SportAccord Convention over prioritising more multi-sport Games.

This is key to ensure good relations remain with the IOC, the Italian claimed.

"It is our vision to be close to the IOC because the sport movement is IOC-centric," he said.

"This year, what has disturbed me most was people saying we don't want interference from the IOC, and the next day they were in the office of [IOC director general] Christophe De Kepper begging for something...

"We also need someone who lives close to the centre [of the sports world in Lausanne] to ensure that they are more equipped for developments as they happen."

Several ASOIF members could vote for Arzhanova, however, it is thought, particularly those who are considered less close to the IOC.

But it is thought that many non-Olympic Federations are worried that a vote for the Russian could effectively lead to the loss of any remaining power in the organisation as the IOC could withdraw even more support, thus encouraging an exodus from the ASOIF members.

Although no recommendation to vote either way was delivered at the meeting of the Alliance of Independent Recognised Members of Sport (AIMS) here, it is thought that most will vote for Baumann as they are keen to continue good relations with the IOC following the signing of a Memorandum of Understanding (MoU).

The Association of IOC Recognised International Federations (ARISF) which constitute 35 of the SportAccord members, including CMAS, are thought to be more divided.