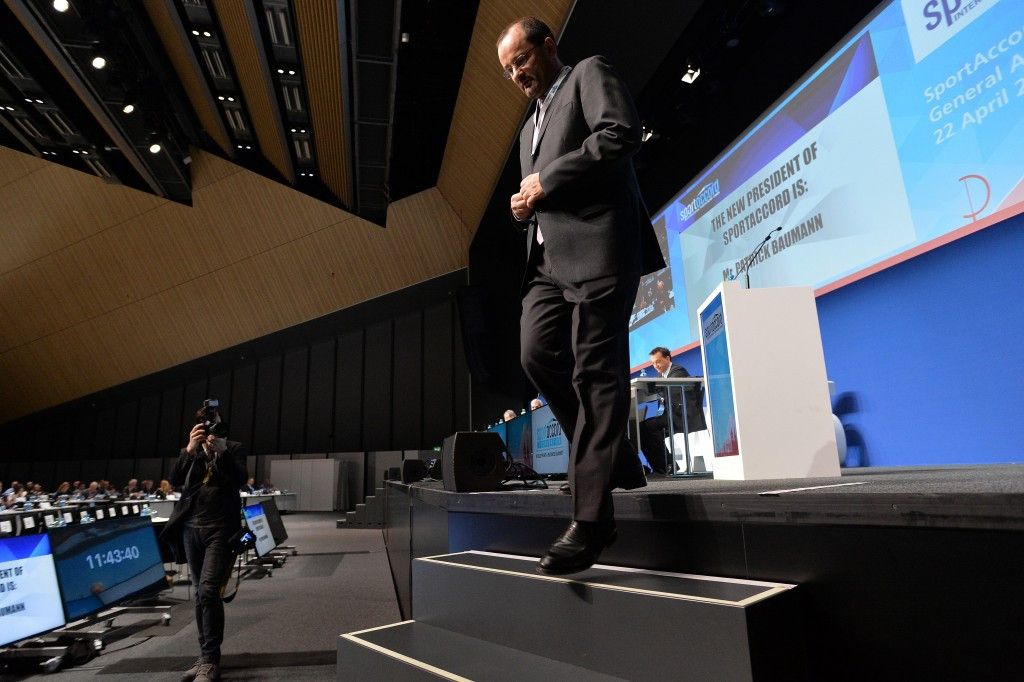 Baumann, the 48-year-old International Basketball Federation (FIBA) secretary general and International Olympic Committee (IOC) member, triumphed by 55 votes to 25 in an election in which 80 of the 89 current SportAccord members participated.

He will serve one four-year term in office, juggling his responsibilities with his FIBA and IOC roles as well as his chairing of the Organising Committee for the 2020 Winter Youth Olympic Games, due to be held here in Lausanne.

Baumann's closeness with the IOC was seen as the crucial factor in his victory, leading to decisive support from the non-Olympic Federations which constitute the majority of SportAccord members, as well as the Olympic ones.

It follows a tumultuous year for the organisation after President head Marius Vizer resigned last May little more than a month after he criticised the IOC and its President Thomas Bach at the SportAccord General Assembly in Sochi.

Arzhanova, President of the World Underwater Federation and perceived to be close to Vizer, was seen by many as too much of a risk at a time when it is believed a further cooling of tensions with the IOC could result in the death knell of SportAccord and a mass exodus of the Olympic sports from the organisation.

This is despite her campaigning hard to show how she would push for close relations with the IOC.

Baumann will prioritise "trying to build an atmosphere where people are not thinking only of division, but what can bring us all together", he said afterwards.

He added: "SportAccord can still serve as the voice of sport.".

Baumann has now vowed to assess the state of aspects of SportAccord with his Council colleagues before considering potential changes.

Major priorities include an assessment funding and personnel issues, such as whether they can afford to hire a new director general, as well as the process to select new sports for SportAccord membership.

This follows arm wrestling, poker and rugby league all having their membership applications acceptance process delayed yesterday until after the new President is installed.

Baumann is also hoping the world governing bodies representing athletics, golf, rowing and shooting will return to the fold after withdrawing last year.

International Rowing Federation President Jean-Christophe Rolland was present today in an observational capacity, telling insidethegames afterwards how he would only consider returning to the fold if he could see tangible benefits from doing so.

Baumann claimed all Federations should prioritise good governance in the aftermath of recent scandals in FIFA, the International Association of Athletics Federations and other bodies.

“We have to be ready for change and we have to improve ourselves on a daily basis if we don’t want somebody else to change us,” he said,

“It is a challenge for every single one of us.

"Every single Federation has to take this extremely seriously and take a hard look at how we do things so that we avoid as much as possible troubles and the negative titles in the press.

"That is not what sport needs."