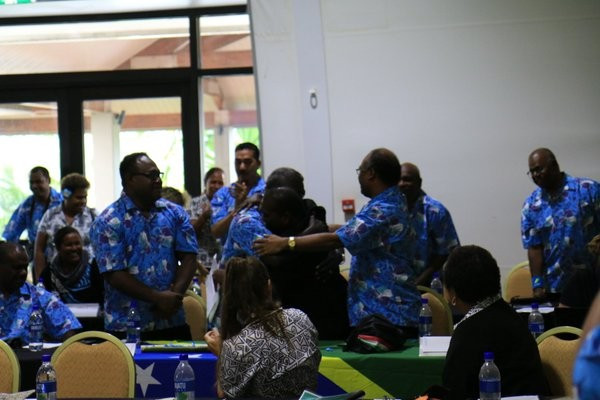 The Solomon Islands have beaten off competition from Tahiti to secure the hosting rights for the 2023 Pacific Games, it was announced today.

The decision was taken by the 22 members of the Pacific Games Council (PGC) at the organisation's General Assembly in Vanuatu.

The margin of victory was reportedly a single vote.

It represents a shock result as Tahiti were considered the strong favourites to land the event, with PGC executive director Andrew Minogue telling insidethegames at last year's edition of the Games that they would be "tough to beat".

The 2023 Pacific Games will be the first to ever be held in the Solomon Islands, made up of six major islands and 900 minor islands in Oceania, which hosted the inaugural Mini Games in 1981.

The nation, which has a population of less than 600,000, will be the eighth Pacific country to stage the quadrennial competition, following in the footsteps of Fiji, New Caledonia, Papua New Guinea, French Polynesia, Samoa, Guam and Tonga.

The decision of the PGC represents another blow to Tahiti, the largest island in French Polynesia, an overseas collectivity of France, after they also lost out to Tongan capital Nukuʻalofa in the race for the 2019 Games.

Both the Solomon Islands and Tahiti made their final presentations to the PGC's members during the second and final day of their General Assembly.

The delegation from the Solomon Islands included Prime Minister Manasseh Sogavare, who was granted special adjournment in Parliament for the trip, which came after the Government had promised to financially back their bid.

They have also promised to construct a brand-new National Stadium in capital city Honiara, the venue for the sporting events on the programme at the 2023 Pacific Games.

As part of the process, the PGC Executive Board, who do not have a vote in the selection of the host city, had conducted inspection visits to Tahitian capital Papeete and Honiara in March.

Tahiti were the first nation to declare interest in the event, which is growing in popularity both in Oceania and worldwide following the debuts of Australia and New Zealand at Port Moresby 2015.

It was thought their early announcement might count in their favour among the electorate and prompted Minogue to claim they had "laid down a marker".

The bidding process for the PGC's flagship competition was changed to give countries a seven-year period to ensure they are ready to host the event, a process which mirrors that of the Olympic Games and Commonwealth Games.