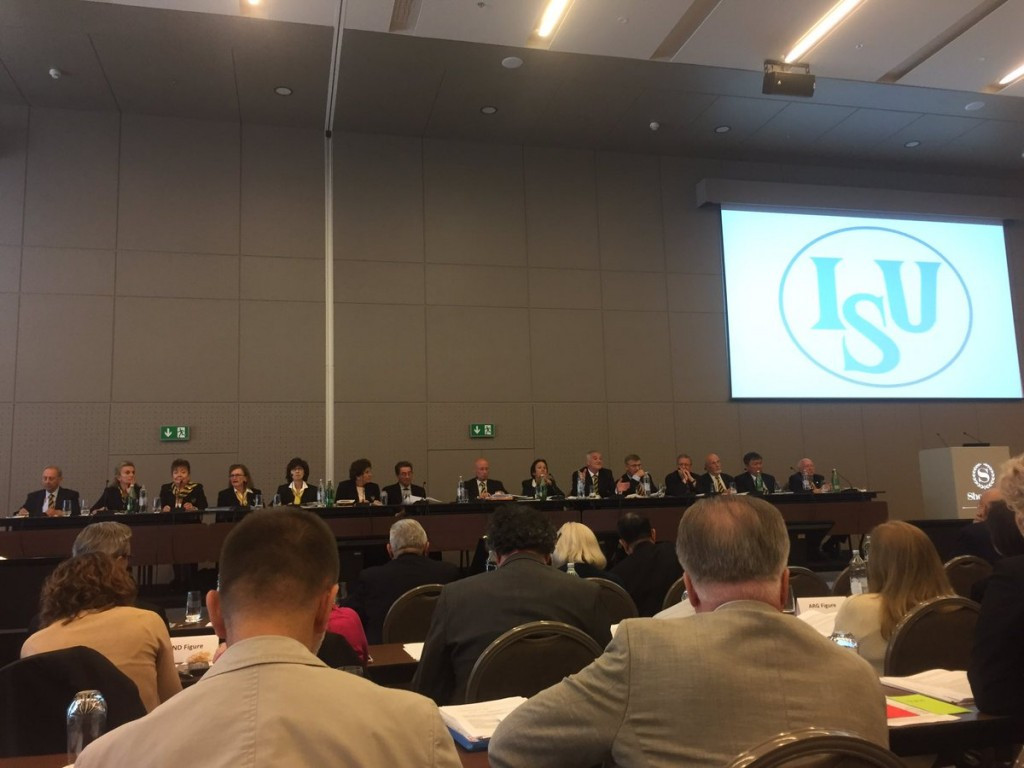 An Athletes' Commission is to be introduced by the International Skating Union (ISU) for the first time, it was decided here on the second day of the body's Congress, while two extra Council positions will also be created.

It comes as over 350 delegates continue to debate over 340 changes to the ISU Constitution and other rules during a five-day meeting.

But the ISU is one of the only Olympic International Federations not to have a specific panel of athlete representatives, something seen as increasingly vital..

After an agreement was made in principal this morning for such a body to be created, there were more discussions this afternoon on how exactly it would work.

A five-person body will be formed, with one representatives from single and pair skating, ice dance, synchronised skating, short track and speed skating.

Each will be elected by other athletes in a secret ballot during each discipline's respective World Championships next year.

Candidates will serve two-year terms and must have competed in at least one senior ISU event for each of the four previous seasons in order to be eligible.

A chair and vice-chair will then be chosen from within the five following their elections, with the top position to alternate between a figure and a speed-skating representative.

Commission members will be chiefly reponsible for representing the ideas and opinions of athletes, as well as working with other ISU office-holders and serving as ambassadors "to increase the popularity of skating and inspire youth".

They will also liaise with the IOC Athletes' Commission, whose members include China's former short-track Olympic champion Yang Yang, who is standing for an ISU Council position here this week.

Modernising the body and enhancing relations with the IOC is a key aim of the Congress.

Other changes made today included abolishing a ban on media and other guests attending the biennial event.

This change, introduced in order to "eliminate an outdated rule", will come into force at the next ISU Congress in 2018, meaning that media remain banned this week.

An extra speed and figure skating representative will also be added to the Council to bring its total number of members to 13.

Five new representatives will be elected here on Friday (June 10), along with two new vice-presidents and a new President.

The race to select the body's first new President after 22 years of rule by Italy's Otavio Cinquanta is developing into an intriguing four-horse race between France's Didier Gailhaguet, Hungary’s György Sallak, The Netherlands' Jan Dijkema and Britain's Chris Buchanan.

No clear favourite has yet emerged.

Gailhaguet is thought to be running a stong campaign but has lost support from some given the controversy his election would generate after he served a three-year ban for his involvement in a judging scandal at the 2002 Winter Olympics in Salt Lake City.

Sallak, the ISU development coordinator and Dijkema, an ISU vice-president, are thought to have split the speed skating community, who have dominated the ISU Presidency for the last 36 years.

Suspicions over Sallak's use of the development budget and travel expenses in order to lobby for votes have been circulating, with concern over a lack of openness in the process.

A new commission will be set up to orchestrate ISU development funding following these concerns, it was also decided today, although similar proposals for a Marketing and a Presidents Commission were rejected.

IOC President Thomas Bach had been due to attend the election on Friday but is now thought unlikely to be present as he is planning to attend the funeral of boxing legend Muhammad Ali the previous day in Louisville.