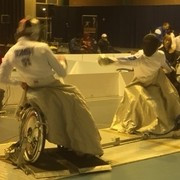 Italy’s Emanuele Lambertini secured his second gold medal on day two of the International Wheelchair and Amputee Sports Federation (IWAS) Under-17 and Under-23 Wheelchair Fencing World Championships at the Pagecentrum in Stadskanaal in The Netherlands.

Lambertini, winner of the mixed foil event on day one, was pushed all the way in the final of the Under-17 mixed épée competition before he battled to a 15-14 victory over Alena Edvokimova of Russia.

The gold medal bout proved to be a thrilling affair between the two wheelchair fencers, providing the crowd with a nail-biting tactical display.

Abdullah Alkaldi of Kuwait and Germany’s Maurice Schmidt were the recipients of the two bronze medals on offer.

While there had been disappointment for Russia in the opening event of the day, Victor Drovnov delivered success for the nation in the second as he topped the podium in the Under-23 mixed sabre tournament.

The competition proved an exciting one despite the relatively small number of entrants, with Drovnov and Hong Kong’s Chi Fung Ng the two stand-out performers.

The duo were always likely to meet for the gold medal and both progressed to the showpiece contest, leaving a straight fight for the Under-23 world title.

Drovnov found his range early on but Chi kept himself in contention before the Russian pulled away, eventually sealing a 15-8 triumph to ensure he will depart Stadskanaal as world champion.

Birhan Ungar delighted the home crowd by earning bronze for the host nation, with the other in the discipline going to Nino Tibiashvili of Georgia.

The IWAS Under-17 and Under-23 Wheelchair Fencing World Championships are set to continue tomorrow with action in the women’s Under-23 épée and men’s Under-23 foil events.

A total of 60 athletes from around the world have gathered for the competition, the highest number of competitors to ever attend a Junior World Championships.