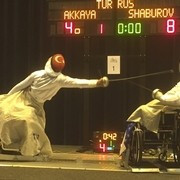 Russia’s Maxim Shaburov secured his second gold medal of the International Wheelchair and Amputee Sports Federation (IWAS) Under-17 and Under-23 Wheelchair Fencing World Championships on the final day in Stadskanaal in The Netherlands.

Shaburov, winner of the men’s under-23 foil competition at the Pagecentrum yesterday, produced another fine display to end the event in golden style as he topped the podium in the épée division.

The Russian overcame Hakkan Akaya of Turkey in the final as he took control early on before closing out a 15-7 victory.

He had earlier knocked out arch-rival Emanuele Lambertini of Italy, who he beat to win the under-23 foil title, by the same scoreline.

Bronze medals in the category went the way of Maurice Schmidt and Lambertini, who departs the Dutch venue with two crowns to his name having reigned supreme in the under-17 mixed foil and under-17 mixed épée events.

Alena Evdokimova replicated compatriot Shaburov’s feat as she picked up her second title of the World Championships by beating Georgia’s Nino Tibiashvili in the final of the women’s under-23 foil tournament.

With just four competitors entered in the discipline, Evdokimova took to the piste as the favourite and she didn’t disappoint, recording another victory over Tibiashivili following her under-23 épée semi-final success yesterday.

The Russian fencer dominated the gold medal bout from start to finish on her way to a comprehensive 15-1 thrashing of the Georgian to reassert her status as the best in the world in her age group.

Russia finished at the top of the medal table with a total of 14, five of which were gold, with Italy second having claimed two golds in an overall haul of four.