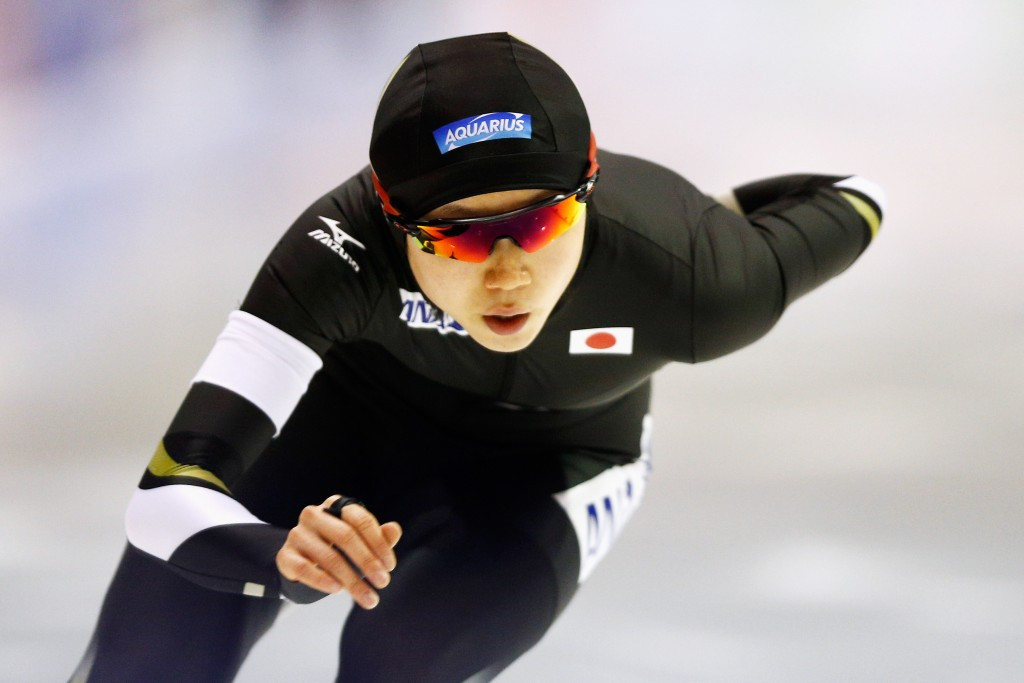 Jing Yu also added to her golds from the event as the Chinese skater bagged a second win in the women’s 500m, having won the first round of the race on Friday (December 2).

Russian duo Ruslan Murashov and Pavel Kalizhnikov improved on their results from yesterday’s men’s 500m, finishing first and second respectively in the second round of racing today.

Another Russian skater, Denis Yuskov, secured the gold medal in the men’s 1,500m after clocking a time of 1:45.50.

In the mass start races held to round off the action, Canada’s Ivanie Blondin took the women’s title and Italian Andrea Giovannini won the men’s.

Jorien ten Mors of The Netherlands had set the pace in the women’s 1,500m final in the opening race with her time of 1:57.28 keeping her in front until the penultimate pairing, where Takagi moved ahead by nearly a second, despite making a slower start.

Only Antoinette de Jong or Marrit Leenstra could stop Takagi from winning as the Dutch pair started the final race of the final and the latter seemed to be course to grab gold.

Heading into the final lap, Leenstra was 0.88 seconds ahead of her Japanese rival, but then she could only clock 32.7sec in the last 400m and had to make do with the silver medal, with ten Mors taking bronze.

Despite failing to take gold, Leenstra did move to the top of the World Cup rankings, overtaking the United States’ Heather Bergsma, now in third place as Takagi went above her too.

Yu bettered her time from Friday by 0.19 seconds as she got over the line in 37.64, holding off the challenge of Maki Tsuji in their pairing.

Tsuji’s time of 37.82 was good enough for the silver medal and fellow Japanese skater Erina Kamiva took bronze with a time of 37.88.

Yu’s second success of the event saw her move above Japan’s Nao Kodaira, who has not been competing in Astana, and Sang-Hwa Lee of South Korea, who did not take part today after finishing third on Friday.

In the men’s 500m final, Murashov got round in 34.52 to take the lead after the fourth pairing and this proved enough for him to win gold ahead of Kalizhnikov, who was timed at 35.59, and Artur Was of Poland took third spot with 34.68.

Kalizhnikov remains top of the World Cup standings with 380 points, 153 points ahead of Dutch skater Dai Dai Ntab, who added a fourth place finish to his maiden competition victory yesterday.

Yuskov moved into second in the men’s 1,500m standings with his victory today and is just 40 points behind leader Joey Mantia of the US.

The Russian went off in the penultimate pairing alongside Canadian Vincent De Haitre, who had the fast splits at 300m, 700m and 1,100m before fading to 15th overall, and Yuskov recorded a time of 1:45.50, beating the mark of 1:46.24 set by Shota Nakamura of Japan.

In the final pair, Mantia set off well and was ahead of Yuskov after 700m, but he dropped off over the last 800m and finished third overall with a time of 1:46.54.

The weekend was completed by two mass races, with the women going first.

Claudia Pechstein of Germany set the early pace before The Netherlands’ Annouk van der Weijden took over in a bid to set-up her colleague Irene Schouten for the final sprint.

The latter could not take advantage of this, however, and instead Blondon raced away to her second victory of the season, holding off Nana Takagi of Japan and South Korea’s Bo-Reum Kim, who came second and third respectively.

Blondin retains the overall World Cup lead on 280 points ahead of Kim on 240, while Italy’s Francesca Lollobrigida, who finished seventh today, third on 190.

Giovannini scored the second World Cup win of his career after a decisive move saw him open an 80 metres gap towards the end of the men’s race which proved too much for Dutchman Evert Hoolwerf to close down.

Fabio Francolini of Italy sits in second place on 141, just a single point ahead of Giovannini.

The next leg of the season is due to be in Heerenveen in The Netherlands, with racing going on from December 9 to 11.