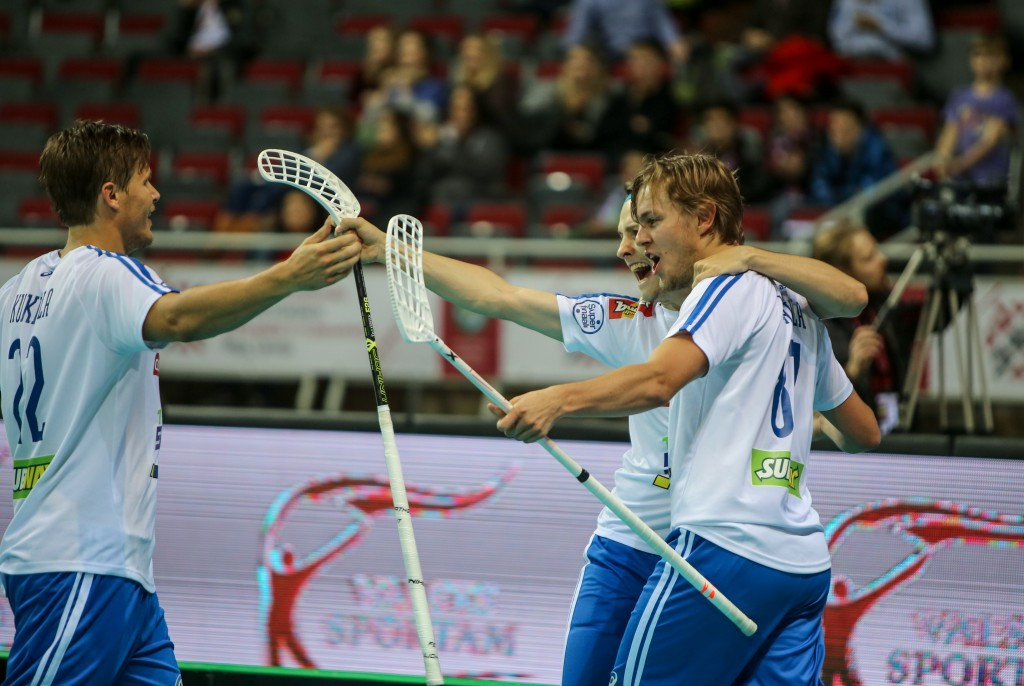 Finland secured their second win of the World Floorball Championships  as they saw off Switzerland 6-4 in the Arena Riga today.

They had to work hard for the victory, which means they top Group A, on the second day of competition in Latvia as they saw the Swiss comeback from 4-1 down to level proceedings in the third period.

Miko Kailala calmed some of the Finnish nerves with a goal inside the last 10 minutes before the team added a sixth to their score in the dying seconds after their opponents took their goalkeeper out in search for an equaliser.

Janne Lamminen put Finland ahead after 48 seconds before strikes from Peter Kotilainen and Sami Johansson made it 3-0.

Manuel Engel responded for Switzerland, but Jani Kukkola put Finland 4-1 up less than a minute later.

The Swiss played more aggressively in the second period and got to within one goal with scores during powerplays from Luca Graf and Emanuel Antener.

Then with just under 13 minutes left, the equaliser came from Manuel Maurer, but following the Swiss side’s hard work, Kailala put Finland in front again and Eemeli Salin rounded off the victory with three seconds to go.

In Group A’s other game, Germany and Estonia played out an entertaining 6-6 draw.

With nine minutes left, the Germans were 6-3 up, but they capitulated as Rein Kivi, Patrik Kareliusson and Andreas Woiduma all scored, the last two coming inside the final couple of minutes.

Estonia will, however, look back and regret not converting a penalty with six minutes remaining as Mike Dietz saved Patrik Markus’ shot.

Hosts Latvia fell to a second defeat of the tournament as the Czech Republic soared to a 9-3 success in Group B.

The damage was done in the first period as Latvia conceded six.

In Group D, the United States comprehensively won an all-North American battle as they thrashed Canada 8-1.

William Eriksson and Mattias Hansen both bagged braces while Reed Hearns, Steffan Zimmermann, Alexander Granvald and Michael Binder all grabbing a goal each.

The other match in Group D was a South-East Asia derby between Thailand and Singapore.

It ended 8-2 to Thailand as Pawat Thaidit and Alexander Rindfalk both scored hat-tricks.

Poland and Slovakia started their campaigns a day later than the rest and the latter won the Group C clash 6-4.

They raced into a 3-0 lead before the Polish team got back on level terms.

A pair of Martin Kubovic strikes put Slovakia in front again and Lukas Rezanina finished off proceedings after Lukasz Chlebda pulled one more back for Poland.

Defending champions Sweden, who have won the Championships nine out of 10 times, are due return to action tomorrow when they take on Norway.

Finland are playing Estonia in Group A while Australia face Slovakia and Denmark meet Poland in Group C.