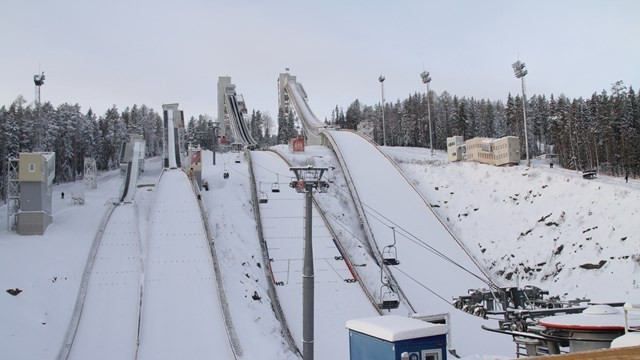 Qualification for the Ladies Ski Jumping World Cup round in Nizhny Tagil was postponed for 24 hours today - as the Italian team do not have their skis.

Organisers of the event in the Russian city decided to change the schedule after the Italy team’s skis failed to arrive in time for the competition.

Instead, the jumpers were given more practice time before the qualification round, which will now take place tomorrow at 3.30pm local time, with the main competition due to start at 5pm.

In the practice run, Sara Takanashi of Japan made the longest jump at 97.5 metres and looks to be continuing the form which saw her win the World Cup title last season.

Takanashi finished first in both events in Lillehammer last weekend and this week, it is the men’s World Cup turn to hit the ramp in the Norwegian town with two competitions on the hill for them.

Their first competition set off with no delays and it was double Olympic gold medallist Jamil Stoch of Poland who dominated qualifying.

The 29-year-old landed two metres short of the hill record, set by Switzerland’s Simon Ammann in 2009, with his skis touching the floor at the 144m mark, which led to Stoch receiving 169 points.

He looked to have picked up a knee injury after his jump, but the Pole has said he will be OK for tomorrow’s competition.

Other good performances came from Norway’s Anders Fannemel, who scored 152.4 with his jump of 139.5m, while Austrian Michael Hayboeck got 148.9 points for his leap of 135.5m.

The first competition is set to start at 4pm CET tomorrow with the second contest beginning at 3pm CET on Sunday.