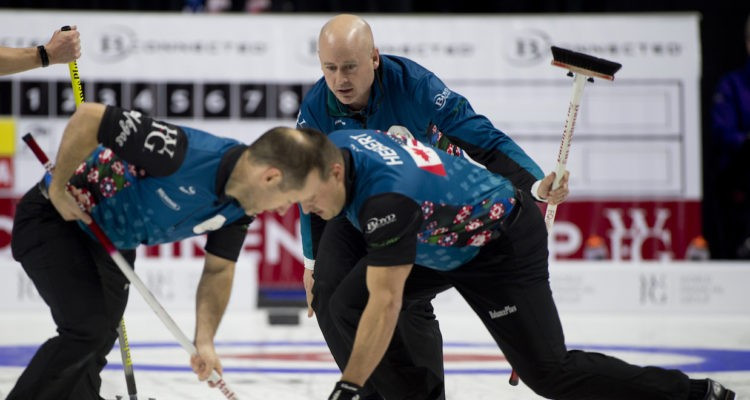 North America have gained a 10-8 advantage over the Rest of the World following day two of the 2017 Continental Cup of Curling in Las Vegas.

The two teams could not be separated on day one, but the Americans have taken control following two session victories at the Orleans Arena today.

An emphatic day for the hosts was brought to an end by North America’s Kevin Koe, who defeated Team World’s Rasmus Stjerne of Denmark 6-3 in a rematch of last year's World Curling Federation (WCF) Men’s World Championship gold-medal match in Basel in Switzerland.

It would be the only North American victory in this evening's session.

The rest of the world prevailed in the other men’s game with Norway’s Thomas Ulsrud defeating Heath McCormick of the US 7-3, while the other game was halved.

Sweden’s Anna Hasselborg stole a point in the eighth and final end to snatch a 6-6 draw with North America’s Jennifer Jones.

The damage had been done earlier in the day by the Americans though as they won both the morning and afternoon session by two points to one.

North America’s Braeden Moskowy made two pivotal shots in the second end of his match against Niklas Edin of Sweden as he went on to win 7-4.

That combined with Chelsea Carey’s 7-3 win over reigning world women’s champion Binia Feltscher of Switzerland, gave the North Americans the overall lead for the first time.

Satsuki Fujisawa of Japan scored consecutive doubles in the fifth and sixth ends for an 8-3 victory over Jamie Sinclair of the US to keep the rest of the world in contention.

North America extended their dominance to the afternoon session as they came close to a clean sweep of the mixed doubles matches.

Only a spirited effort from the rest of the world pair of Japan’s Mari Motohashi and Norway’s Christoffer Svae prevented a whitewash.

The husband and wife pairing of Jennifer Jones and Brent Laing, the number two ranked mixed doubles pair in Canada, were their victims as Motohashi and Svae claimed a 7-5 victory.

In the other games, Calgary’s Jocelyn Peterman teamed with Chris Plys of the US for a 7-5 win over the Swiss and Danish pairing of Irene Schori and Mikkel Poulsen.

However, Jill Officer and Reid Carruthers secured a second North American point of the afternoon after they scored two points in the fifth end before stealing singles in the final three for a 7-4 triumph over Swedish duo Sara McManus and Christoffer Sundgren.

“It’s not our first barbecue, we’re both veterans, and I think we did a really good job of supporting each other and keeping our focus,” said Carruthers.

“To be honest, we really didn’t know what was going on on the sheet next to us because we were so dialled in, and Jill had to make a beauty for the win.

A total of 60 points will be available from the three disciplines being contested in Las Vegas, meaning the side that earns more than 30 points will be declared the champion.

Described as curling's version of golf's Ryder Cup, points are won for each victory with the North Americans claiming a narrow 30½–29½ success at the 2016 event, which was also held in Las Vegas.