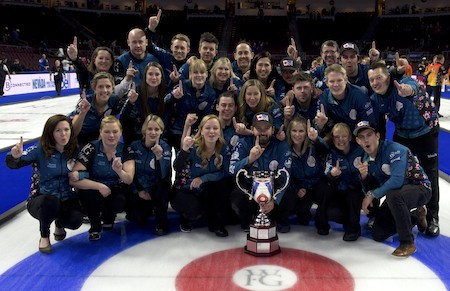 North America won their fifth Continental Cup of Curling title in a row as they convincingly defeated the Rest of the World team 37-23 at the Orleans Arena in Las Vegas.

The hosts took a 19-11 lead into today's final day skins competitions and extended their advantage with relative ease.

After a dominant morning, the home team came close to winning the trophy with time to spare as they took eight of the available 15 points, leaving them just 3.5 points away from clinching victory.

Canada's Marc Kennedy claimed a 3-2 win over the Rest of the World’s Norwegian Torger Nergård, before American Heath McCormick prevailed 3.5-1.5 over Rasmus Stjerne of Denmark.

Satsuki Fujisawa of Japan was a 3.5-1.5 winner over Chelsea Carey of Canada in the other afternoon match.

Canadian Olympic champion Jennifer Jones, who captured her seventh victory in the Continental Cup of Curling, lost the first skins match of the evening, 3-2 to Sweden’s Anna Hasselborg, but it proved insignificant as the North Americans won the other two contests of the session.

Canadian world champion Kevin Koe and his mixed skins team were 4.5-0.5 winners over Norwegian Thomas Ulsrud’s line-up, which put the North Americans on the brink of victory, before Reid Carruthers of Canada defeated Sweden's Niklas Edin 3.5-1.5 in the decisive end to clinch victory.

"Oh, the adrenaline is still running through me, to be honest," said Carruthers.

"For a clinching shot like that, it was pretty exciting.

"I knew the bench was going to be going crazy so that’s why I looked there first, and the crowd figured it out when we were celebrating so hard.

"It was pretty cool.”

A host location and dates for the 2018 Continental Cup of Curling will be announced in the next few weeks.