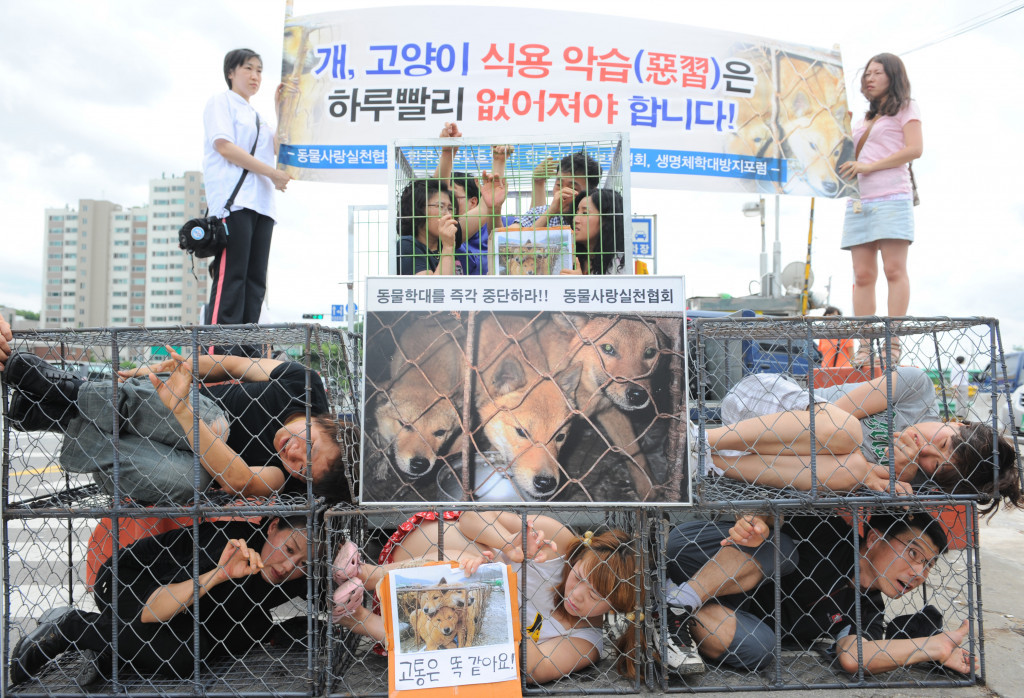 South Korea’s largest dog meat market is in the process of being closed down before next year's Winter Olympic and Paralympic Games in Pyeongchang as the country continues to face international criticism over the practice of killing the animal for human consumption.

Officials and market merchants have started tearing down dog kennels and slaughterhouses at Seongnam’s Moran market, which sells an average of 220 dogs bound for the butcher each day, or 80,000 each year.

Online petitions have been launched calling for a boycott of Pyeongchang 2018 unless South Korea prohibits the eating of dog meat.

The decision to remove the facilities came on the back of animal welfare campaigners pointing out the inhumane conditions in which the dogs were confined and the means by which they were killed - electrocution, hanging and beating.

Merchants agreed on the market’s closure in December, with the city of Seongnam offering to provide administrative support in order for them to shut down their businesses and transfer to a different industry by May.

The move has now been greeted with opposition, with South Korean media reporting that seven of the 22 dog meat sellers who initially agreed to it are now against it.

"Almost 80 per cent of our customers visit our shops to buy fresh dog meat, so what are they going to do if we cannot provide it for them?" Shin Seung-cheol, a Moran trader, told The Korea Herald.

"Is the Government going to pay us?"

South Korean newspaper The Hankyoreh reported that Kim Yong-bok, chair of an association of merchants in the Moran market, stood in front of his shop and publicly announced that he would initiate voluntary renovations of his facilities.

"We were very afraid of losing our livelihood, but through the seven months of deliberation, we were able to build a partnership of mutual trust and reliance with Seongnam" he said before contributing to the closure.

"I believe we can find a new way to maintain our livelihood."

The exclusion of dogs from the definition of livestock in laws about maintaining livestock hygiene has made it difficult for local officials to regulate the industry.

It has been highlighted by activists, however, that the law does prohibit "brutal" methods and the killing of animals in the open.

Quoting figures from the Korean Statistical Information Service, The Korea Observer reports that 892,820 dogs were being kept at more than 100 farms in 2010.

The Pyeongchang 2018 Winter Olympics are due to take place from February 9 to 25, while the Paralympics are scheduled for March 9 to 18.

When contacted by insidethegames regarding the closure of the Moran market, Pyeongchang 2018 declined to comment.