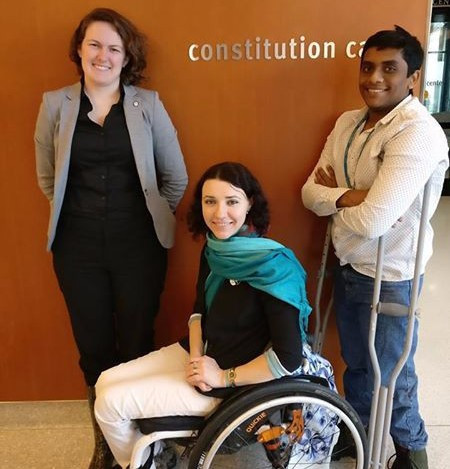 Two wheelchair fencers have been selected to take part in the United States’ Department of State’s Global Sports Mentoring Programme.

The initiative aims to combines mentoring and cultural exchange to connect more than 100 people, who are deemed to be striving to make positive changes to their community.

India’s Vibhas Sen and Russia’s Ksenia Ovsyannikova will both seek to influence their respective communities after becoming part of the programme.

The former has previously claimed the cost required to take part in the sport has prevented many of his compatriots in India from progressing and reaching a competitive level, with less-costly sports instead getting more interest.

Sen, whose disability was brought on by polio, claims more needs to be done to prevent other impaired athletes from being blocked from entering sport.

“When I was young, I was blocked because of a lack of awareness and support," he said.

“Now, I want to make sure no other para athlete goes through the hardships I went through.

“In 2016, India won more Paralympic medals than Olympic levels, even though we had 100 less athletes.

“If we work hard to develop more people like me we can make a great impact everywhere in the country.

“There is talent and there is interest, we just need to be better at finding people.”

As well as being ranked 35th in the men’s sabre rankings, Sen serves on the Maharashtra Paralympic Swimming Association, Mumbai Fencing Association and Wheelchair Fencing Federation of India committees.

He will work with International Paralympic Committee (IPC) Medical Committee chairperson Cheri Blauwet, with the contacts and knowledge the seven-time Paralympic wheelchair racer has expected to aid Sen’s hopes for a nationwide movement of adaptive sports in India.

Ovsyannikova will also receive support from Blauwet and Mary Patstone, director of adaptive sports and recreation at the Spaulding Rehabilitation Network in the United States.

The wheelchair fencer, who has achieved Russian, European and World Championships in sabre, foil, and epee, is hopeful of increasing athlete recruitment in Russia’s hospitals and rehabilitation centres.

Ovsyannikova hopes to tackle issues concerning the inaccessibility of facilities and transportation in the country, as she currently acts as the Wheelchair Fencing Federation of Russia’s executive secretary  of international relations.

"I want to show that disabled people can do almost anything that everyone else can do," Ksenia said.

"We just need to understand each other’s’ situations."