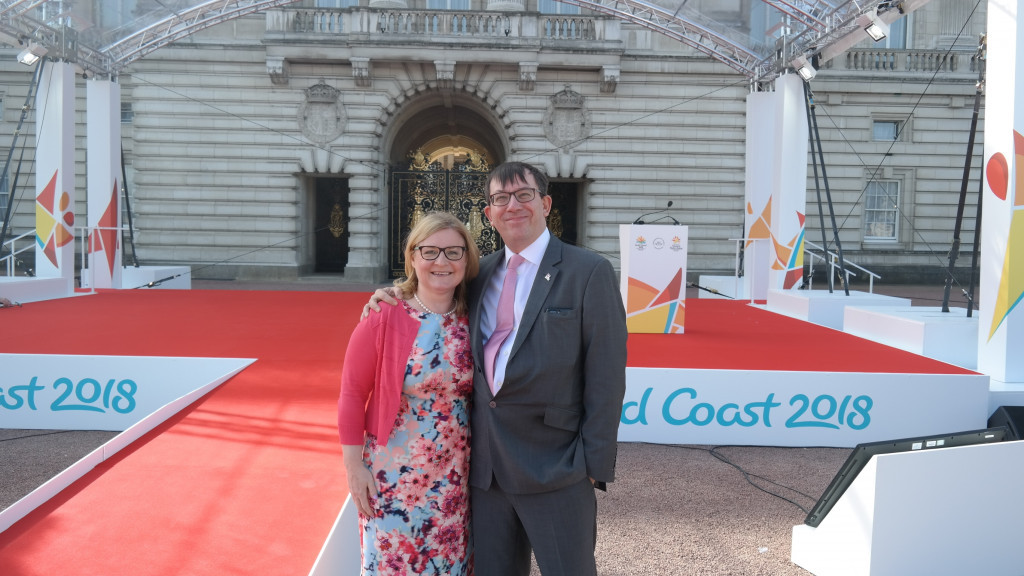 A Milton Keynes married couple were among the specially invited guests at Buckingham Palace for the start of the Queen’s Baton Relay for next year’s Commonwealth Games in the Gold Coast.

Duncan Mackay and Sarah Bowron own insidethegames.biz, the cutting-edge sports news website which is based at the MK:TWO Business Centres in Bletchley.

Sarah, the company’s Managing Director, said: “I am a huge fan of the Royal Family so this it was a great honour for me and for insidethegames.biz to be there for the start of the Queen’s Baton Relay. It is also a sign that the Commonwealth Games Federation, who organisers the Games, recognise that we are the only sports news organisation in the world to report on their news and events 365 days of the year.”

The Queen’s Baton Relay is similar to the Olympic Torch Relay. It takes a message from the Queen, who is the Head of the Commonwealth, through all the countries and territories of the Commonwealth and then the message is read out at the Opening Ceremony of the next Games – usually by the Queen as she declares the Games Open. The next Games will be held on Australia’s Gold Coast, with the Opening Ceremony on April 4, 2018.

It won’t be the first such event for Duncan, the editor of insidethegames.biz as he has taken part in the Olympic Torch Relay twice, for Beijing in 2008 and for London in 2012.

In London 2012, Duncan handed the Olympic Torch to current world tennis number one, Andy Murray, in the hallowed ground of Wimbledon.

Duncan said: “These moments give me great pride, not least because it shows that in a relatively short space of time insidethegames.biz has become recognised for the quality and independence of its journalism across the Olympic Movement and in its dedicated coverage of the Commonwealth Games. We are the only news organisation to cover the Commonwealth Games 365 days a year and often break major stories days or weeks before the others catch on.”