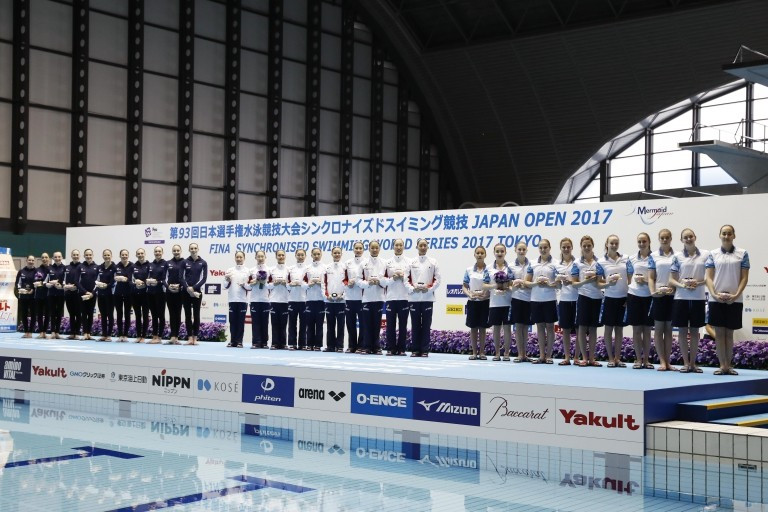 Their team produced an impressive display to claim a comfortably victory in the event at the Tatsumi International Swimming Center.

A score of 93.1667 points proved enough to secure the gold medal, with silver medallists France trailing on a tally of 84.8000.

The podium was completed by Kazakhstan, who finished with a total of 82.7000.

Japanese success continued in the duet competition, with Yukiko Inui and Mai Nakamura topping the standings in the technical routine.

The duo would end with a tally of 90.4721 and they will look to wrap up the overall victory when the free routine is contested tomorrow.

“When we were in juniors we were paired once, but the more experience we gain and the more training we do, we no longer need to guess each other,” said Inui.

“I think Mai is very skilled on the technical side and I really rely on that from her.

“Obviously we are aiming to go on and win tomorrow, but we want to do so with a really good performance.”

Canada’s Jacqueline Simoneau and Karine Thomas are in second place on 88.3450 and will hope to overhaul the home favourites tomorrow.

Evangelia Papazoglou and Evangelia Platanioti of Greece lie in bronze medal position on 85.8946.

Japan’s Atsushi Abe and Yumi Adachi were the sole entrants in the mixed duet competition, with the pair receiving a score of 168.3902 for their combined technical and free routines.

Competition in Tokyo will conclude tomorrow.

FINA launched the World Series circuit in January this year.

The French Open in Paris and the China Open in Taiyuan have already taken place, with competitions scheduled for Canada, Spain, United States and Uzbekistan after Japan.