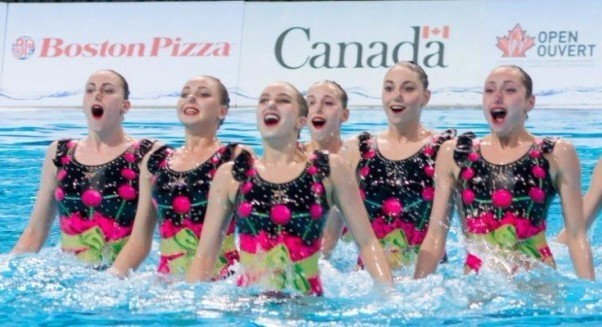 The country scored 93.0333 points to win at the Pan Am Sports Centre in the Canadian city.

Their programme evoked the 1940s and included strong highlights and elements.

Anna Voloshyna, who won a fifth gold medal in Toronto thanks to the victory, said the team had improved when it mattered.

"We saw yesterday a few little mistakes so today we tried to improve and not make them," she said.

The Calgary Aquabelles were Ukraine's nearest challengers as the Canadian club team finished on 83.3000 after performing to the Backstreet Boys.

Stephanie Mattson, who will retire later this year, swam the routine for the last time.

"Our transitions are extremely difficult in this routine," she said.

"While solos and duets are going on there are other things happening with the team.

"No-one is ever just resting and there is always movement."

Ukraine were the sole entrants in the senior team free finals, which they won automatically with a score of 92.6333.

Canada's national team withdrew from both finals today after a series of injuries had left the team unable to compete.