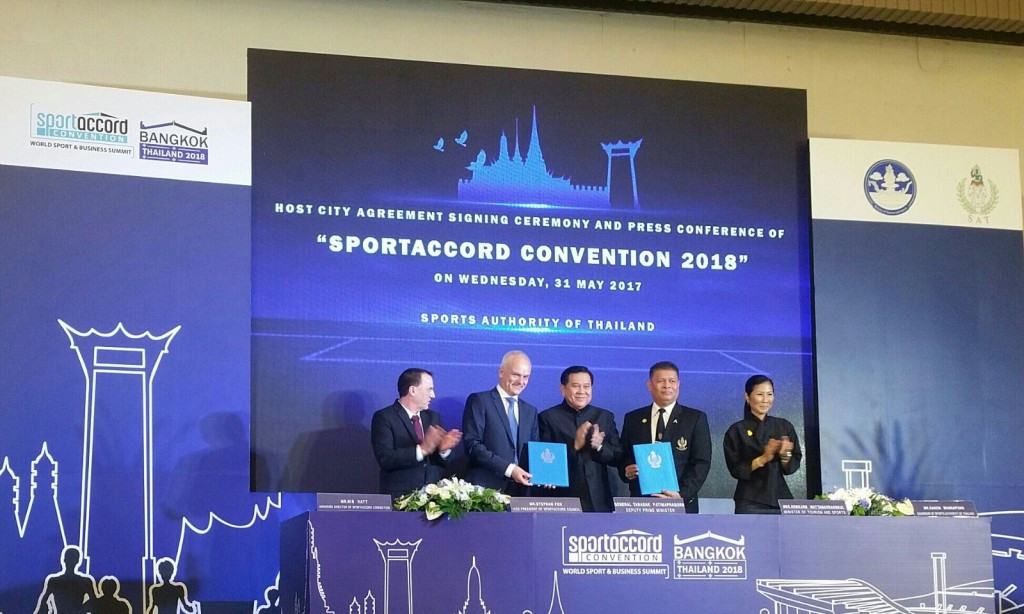 An official signing ceremony has taken place to confirm Bangkok as host of the 16th SportAccord Convention next year.

Thailand's Deputy Prime Minister Tanasak Patimapragorn and Sports Minister Kobkarn Wattanavrangkul were among those present for the event in Thailand's capital city along with SportAccord Convention managing director Nis Hatt.

Bangkok was announced as the host city for 2018 during last month's Convention in Aarhus.

"Hosting the SportAccord Convention in Bangkok enables us to reach out to all the International Sport Federations and those organisations involved in the business of sport to share our sports tourism vision as well as enabling delegates to experience all that Thailand has to offer," said Wattanavrangkul.

"The Tourism and Sports Ministry is a key driver in helping to promote Bangkok and Thailand as a sports dream destination and sports hub in South East Asia, and these are some of the reasons why the SportAccord Convention is an important event for us as the Host City."

Marketing and sponsorship have already been unveiled as the "overarching" themes for next year's event.

They are also aiming to make the event a "family affair" to encourage more delegates to make the journey.

"We are already making good progress with preparations for next year’s Convention and I am confident we will be able to deliver a memorable event in Bangkok for our delegates."

The event will mark the first to take place in Asia since the 2010 edition in Dubai and the first outside Europe since the 2012 event in Quebec City.

The Convention will take place immediately after the Commonwealth Games, due to be held in Gold Coast from April 4 to 15.