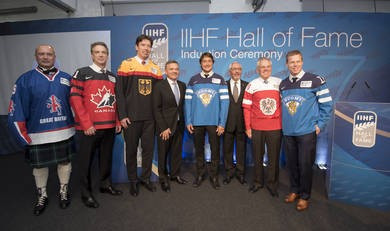 Six jerseys worn by players recently inducted into the International Ice Hockey Federation (IIHF) Hall of Fame have been put up for auction for charity.

Their jerseys are one-of-a-kind having been created for the induction ceremony, and feature a commemorative badge.

Produced by Nike, they are "authentic game jerseys" which have been signed by the players.

Krupp, who was present for the induction in his home city of Cologne - the co-host of last month's IIHF Men's World Championships with Paris - became the first German competitor to win the Stanley Cup in 1996 as he scored the crucial goal in Colorado Avalanche's victory against the Florida Panthers.

He also represented his country at the 1998 Olympics in Nagano before going on to coach the senior team.

Koivu is considered one of Finland's greatest-ever ice hockey players and claimed three bronze medals and one silver at the Olympic Games.

His compatriot Selanne has four Olympic medals to his name having been part of the Finnish teams which finished third in 1998, 2010 and 2014 and second in 2006.

Austria's Kalt represented his nation in every major IIHF event from 1962 through to 1972, before becoming a referee and coach.

Canadian star Sakic helped his country secure gold at the 2002 Olympics in Salt Lake City, where he was voted as the tournament's most valuable player, and also clinched the world title in 1994.

He is viewed as the greatest player in Britain's modern ice hockey history.

The players have each chosen charities to benefit from the sale of the jerseys.

Auction details can be found here.

A jersey worn by American Angela Ruggiero, who was another to be inducted into the Hall of Fame, will also be auctioned.

She was unable to attend the ceremony due to the death of her father, so her jersey will be sold at a later stage once it has been signed.

Ruggiero, who was part of the Olympic gold medal winning American team in Nagano, is the chair of the International Olympic Committee Athletes' Commission.