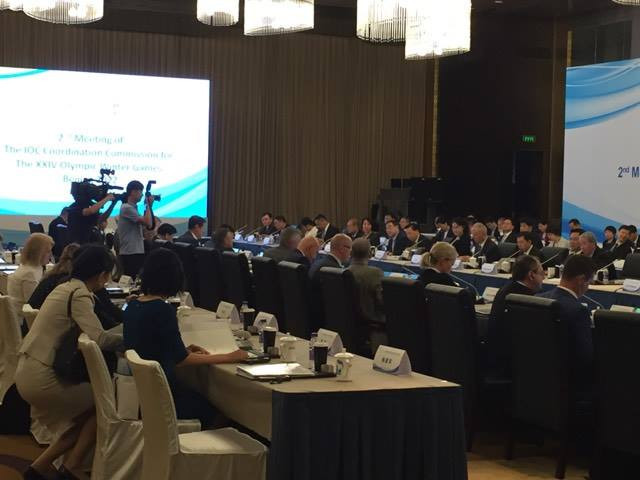 Coordination Commission chairman Alexander Zhukov called on Beijing 2022 to build on the legacy of the 2008 Summer Games in the Chinese capital as he praised organisers for their progress so far during his opening address here today.

Zhukov, a member of the International Olympic Committee (IOC), claimed the Organising Committee of the 2022 Winter Olympics had "already laid the foundations" for a successful event in five years' time.

The Russian Olympic Committee (ROC) President said Beijing 2022 had "achieved many milestones" and that the IOC Coordination Commission had "full trust and confidence" in their capability to deliver a "great" Games.

Zhukov singled out planned development of an industrial sports park in Shougang, located just outside of the capital city in the Shijingshan district, as an example of their commitment to sustainability.

The area, which could host snowboard big air events at the Games, is being regenerated from an old steel mill.

It was closed and moved outside of Beijing prior to the 2008 Olympics because of concerns over environmental damage.

Regional air quality in the city was cited as a key concern by the IOC Evaluation Commission in their report in 2015 due to the high pollution in the region.

The Coordination Commission chair claimed, however, that Beijing 2022 had "embraced the Olympic Games as an opportunity to improve the health of the population".

"It is always a fantastic opportunity to return to a city with such a rich Olympic history," said Zhukov.

"The city and the 2008 Organising Committee captured the imaginations of billions around the planet with their creative venue designs and unforgettable ceremonies.

"Our task during this week is to ensure Beijing continues that legacy by preparing and organising an Olympic Winter Games that in their own way will leave their mark on Olympic history.

"I am told that 50 per cent of the current Beijing 2022 team has work experience from the 2008 Olympics.

"This is not only an incredible benefit for the Organising Committee, but exemplifies the incredible human legacy still alive in Beijing nearly a decade after Beijing 2008.

"As the first host of the Summer and Winter Games, Beijing is breaking new ground by drawing on the venue legacy of Beijing 2008 to help deliver the Olympic Winter Games.

"This goes fully with the IOC’s vision to make the Olympic Games more sustainable."

Zhukov also urged organisers to use all resources available to ensure they achieve their targets and said they should pay close attention to next year's Winter Olympics and Paralympics in Pyeongchang.

"Beijing 2022, with the full support of the IOC Coordination Commission, must also work closely with the partners of the Olympic Movement – National Olympic Committees, International Federations, TOP Partners and rights-holding broadcasters to ensure your ambition is realised," he added.

"A strong transfer of knowledge and information programme is being put into place as part of the IOC’s Olympic Games knowledge management and we fully encourage you and your team to take full advantage of this."

Venues, particularly the Sliding Centre, legacy and marketing are among the main themes set to be discussed during today's meeting.

The second IOC Coordination Commission inspection of Beijing 2022 began with a venue tour yesterday, before members met with Cai Qi, the newly-appointed President of the Organising Committee.

The 61-year-old, presiding over his first Coordination Commission visit, stressed they had the full support of the Government.

"The Chinese Government attracts great importance to preparations for the Winter Olympic Games," he said here.

"We have been pushing forward with our preparations and organisation."