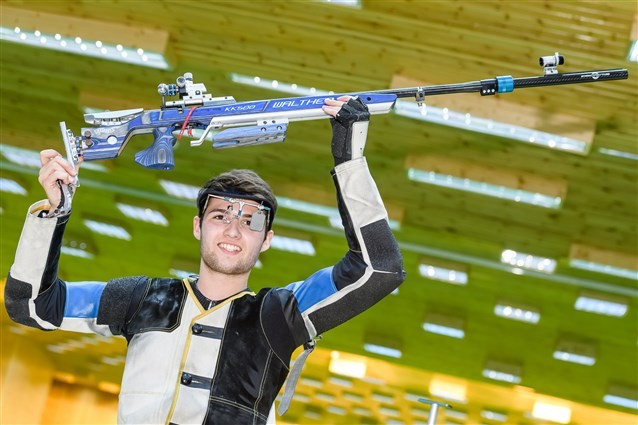 Peni had been denied victory earlier in the competition, winning bronze five days ago in the 10m air rifle competition.

But the 20-year-old produced a dominant display at the Gabala Shooting Club in Azerbaijan today, taking the lead early in the final and refusing to relinquish his advantage.

He finished on a winning total of 458.4 points, despite having missed the 10 ring on four of his final five shots.

“It feels great, it’s been a great competition here in Gabala,” said Peni.

“I had pretty good scored in all three rifle events, and finally won my first Gold medal, that I dedicate to my parents and my girlfriend who have always been very supportive all along my career.

“The main goal of the season for me is the ISSF Junior World Championship.

“It’s my last season as a junior shooter and I want to be remarkable."

The Hungarian youngster finished clear of China’s Hui Zicheng, who won silver on a tally of 457.4, with Poland’s Tomasz Bartnik rounding off the podium on 444.4.

China’s Shi Mengyao topped the standings in the women’s event, with the 19-year-old achieving a junior world record total of 459.

Austria’s Nadine Ungerank ended some way behind the winner on 455.2.

The top three was completed by Stine Nielsen of Denmark, who scored 444.9.

China ended the World Cup competition in Azerbaijan on top of the medals table, having won four gold, three silver and one bronze.