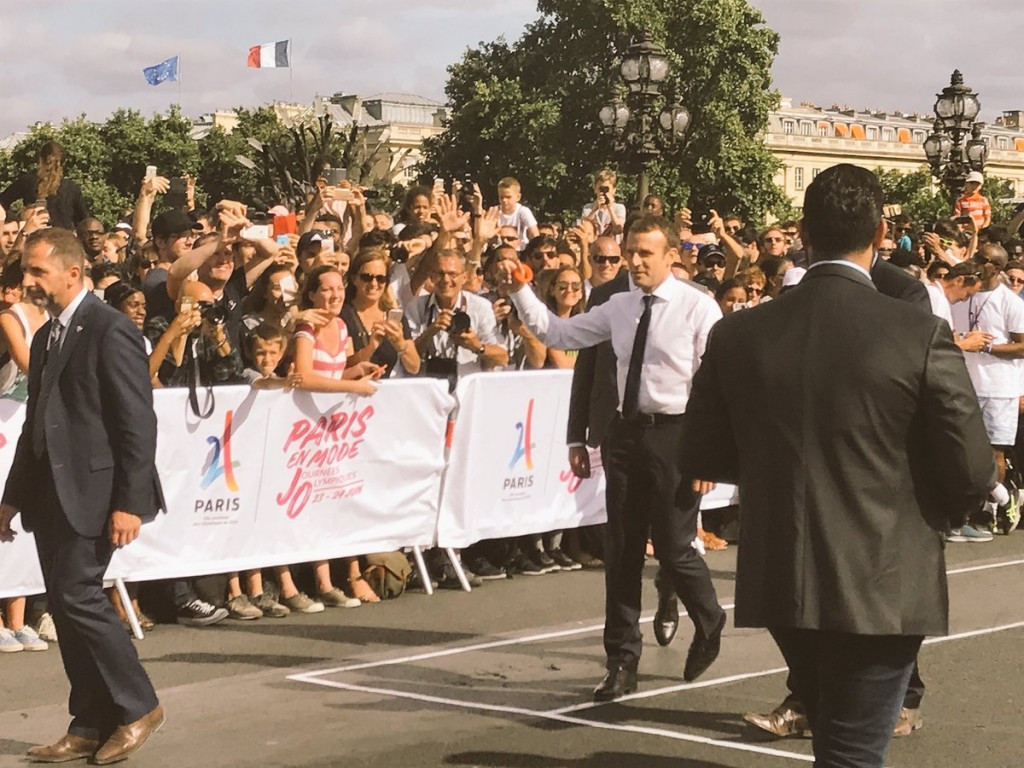 French President Emmanuel Macron took to the streets here in Paris to celebrate Olympic Day and reaffirm his support for the city's bid to host the Games in 2024.

Macron, who at 39 is the youngest President in France's history, travelled along Pont Alexander III before making his way down to the floating athletics track lying on the River Seine.

After greeting the thousands of people in attendance, Macron removed his blazer and took to the court, attempting to play wheelchair tennis as well.

He was joined on court by 2013 Wimbledon champion Marion Bartoli, world number 15 Lucas Pouille, Fabrice Santoro, Michaël Jeremiasz and Charlotte Famin, all of whom are French.

President Macron even put on the boxing gloves for a demonstration on the athletics track later on.

Macron has very much given his backing to the Paris bid since his election in May.

He has already promised that he will travel to the Candidate City Briefing in Lausanne on July 11 and 12 and then at the International Olympic Committee's (IOC) Session in Lima in September to support the French capital's campaign.

The importance that Macron appears to attach to the bid was illustrated by the fact that meeting the IOC Evaluation Commission was his first official appointment in the Élysée Palace, the official residence of the French President, after being officially inaugurated on May 16.

Speaking during the festivities, Macron once again declared his support and described the bid as "a symbol of pride and optimism".

"Paris 2024 is a national project led by an outstanding team composed of athletes and government," the President said.

"It is important to show our support, to show that the head of the state is supporting the bid because the French people are showing a great support as well.

“I confirm that I will be in Lausanne and Lima to show the state’s commitment and promote French assets and pride: Tony Estanguet’s great leadership to gather athletes, the mobilisation of Paris Mayor Anne Hidalgo, Region President Valérie Pécresse and the State services as security, sport and Para-sport with the presence of Laura Flessel, Sports Minister, and Sophie Cluzel, Secretary of Inclusion."

"Paris 2024 is a project with a great vision for the future in France as well as in Europe.

"It is also the athletes’ mobilisation through the support of the athletes themselves but also the federations, the amateurs and the volunteers.

"France has already shown its know-how in the organisation of major events through the 2016 European Championships.

"Above all, Paris 2024 is about sporting excellence for all - both Olympians and Paralympians - because a positive society is an inclusive society."

Olympic Day is dedicated to the founding of the international Olympic Movement by Pierre de Coubertin on June 23, 1894.

It aims to spread the ideals of the Olympic Movement and promote participation in sport across the globe regardless of age, gender or athletic ability.

To mark the occasion, the French capital has been transformed into a gigantic sports park for a two-day celebration, which concluded today.

The City of Paris have announced that 1,120,000 people took part in the Olympic Day event.

Stretching from the Eiffel Tower to Notre Dame along the Seine, the sporting zone is offering the public a chance to sample more than 30 events.

The floating athletics track on the Seine, sports fields on the lawn of Les Invalides, trampolines in the Petit Palais, a high diving board on Pont Alexander III, a cycle track in Paris city centre and a climbing wall on the Pavillon de l'Arsenal are on display among other attractions.

The famous Arc de Triomphe was turned into a velodrome for cycling activity with Estanguet and Paris Mayor Anne Hidalgo taking part this morning.

The event concluded this evening as thousands of professional and amateur athletes complete their "2,024 kilometres for Paris" challenge, which involves cyclists at the Place de la Concorde, equestrian riders from Versailles and runners from each of the four corners of the capital converging on Les Invalides.

A decision on who will host the 2024 Olympic and Paralympic Games, which will see Paris go up against Los Angeles, is due to be made on September 13 at the IOC's Session in the Peruvian capital.