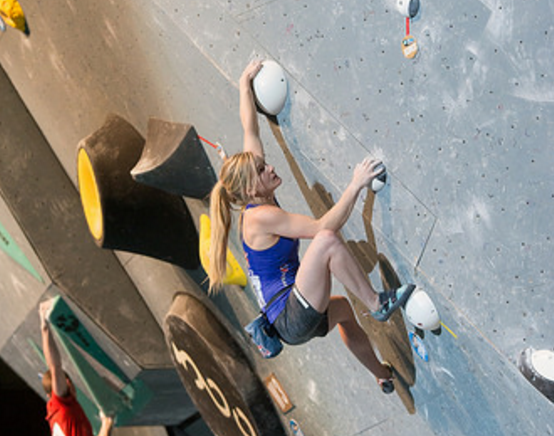 Coxsey, who finished ninth in at Navi Mumbai last year, needs only to place the same or better at the sixth and penultimate event of the season to earn another title, having arrived with a 65 points lead following her victory at the World Cup in Vail, Colorado on June 10.

But she will face a strong challenge from Japanese climbers Akiyo Noguchi and last year’s Navi Mumbai winner Miho Nonaka, who have finished second and third at the last two events.

“The  boulders were quite interesting, lots of different  styles.

“There were a couple of moves that were harder than I had anticipated, especially for a qualification round.

“I flashed four of the five boulders – the last one was really slippery, so I didn’t give it everything,”

Petra Klingler of Switzerland also got through despite having her injured right knee bandaged.

“The qualifiers were not perfect for me, but I have to make the best of it.”

The destination of the men’s title is less certain.

Jongwon Chon’s second victory of the season in Vail took him to within six points of front runner Keita Watabe of Japan.

But because athletes competing in all seven World Cup events have their lowest score discounted, Aleksei Rubtsov of Russia appears well placed to win.

First, however, he will have to beat Chon and the Japanese pair of Kokoro Fujii, the 2016 Navi Mumbai winner, and the defending champion Tomoa Narasaki.

But Fujii topped the rankings as he moved through along with six fellow Japanese climbers.

“There were many types of problem today, I think I can win tomorrow,” Narasaki said.