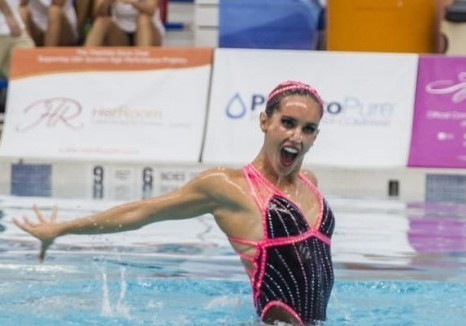 The 27-year-old, winner of Olympic silver and bronze medals London 2012, prevailed in both the solo and duet events at the Nassau County Aquatic Center.

In the individual event, Carbonell posted an overall score of 182.8424 points to win at the American venue.

Michelle Zimmer of Germany claimed the the bronze medal on 155.5901.

Carbonell then doubled her medal haul for the event when she partnered with compatriot Paula Ramirez to win the duet title.

They won gold with 180.8160 points as  Simoneau was once again forced to settle for the silver medal.

Alongside partner Claudia Holzner, the Canadians scored 175.0678 points, while American duo Anita Alvarez and Victoria Woroniecki completed the podium with home bronze on 168.3545.

Bill May and Kanako Spendlove of the United States led the mixed duet competition from start to finish as they won home gold.

Canada's Isabelle Blanchet-Rampling and Robert Prevost were second on 162.4065 and third place went to Germany's Amelie Ebert and Niklas Stoepel with a tally of 145.4847.

The competition in Long Island was the last major synchronised swimming event before the World Championships in Budapest, due to take place from July 14 to 30.

The World Series is scheduled to conclude in Tashkent in Uzbekistan from September 21 to 24.