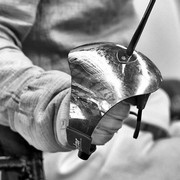 The new measurement will be the same as the current foil distance, where the point of the weapon reaches the inner edge of the opponent's bent arm.

Trials will not begin until after the IWAS Wheelchair Fencing World Championships in Rome, due to take place between November 6 and 12.

Competitors will have the chance to use the proposed new distance at two World Cups stages.

These dates are still to be confirmed, but will take place in the 2018 season prior to the Tokyo 2020 Paralympic Games qualification period.

It is hoped these changes will "maintain the dynamic nature of the sabre weapon".

A full evaluation of the trial will be conducted before final rule changes are made by the Executive Committee.

Changes have also been proposed to give fencers a choice of walking onto the podium and standing for the medal ceremony or to continue to use their wheelchairs as per the current protocol.

The ceremonies will be filmed for evaluation of safety, aesthetics and organisational procedures before any final ruling is made.