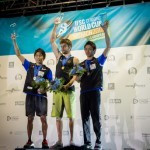 The tall figure of Germany’s Jan Hojer was roared onto victory by a 6,000-strong home crowd at Munich’s Olympic Stadium at the final International Federation of Sports Climbing Bouldering World Cup of the season tonight as Jongwon Chon of South Korea as the overall men’s title.

Hojer was the only man to earn all four tops in the final, with Tomoa Narasaki of Japan taking second place with three ahead of his compatriot Taisei Ishimatsu.

Chon looked a weary figure as he failed to earn a third top on the fourth and final problem, but as he eventually dropped down to the mat with a rueful grin and a wave of both hands, the 22-year-old had the consolation of knowing he had repeated his feat of 2015 in becoming overall World Cup champion.

Narasaki’s silver on the night moved him up to overall silver in the 2017 rankings, with Alexey Rubtsov of Russia finishing with overall bronze.

The success of Hojer today also earned him the title of European Bouldering champion, as that event was incorporated in the programme.

Garnbret was the only woman to manage three tops in the final.

Britain’s Shauna Coxsey, who had already confirmed her overall World Cup title with victory in the previous Bouldering World Cup at Navi Mumbai in June, her fourth win of the season, finished second on the night ahead of Akiyo Noguchi of Japan.

The final result was enough to instal Garnbret and Noguchi in silver and bronze position in the overall World Cup season’s standings.