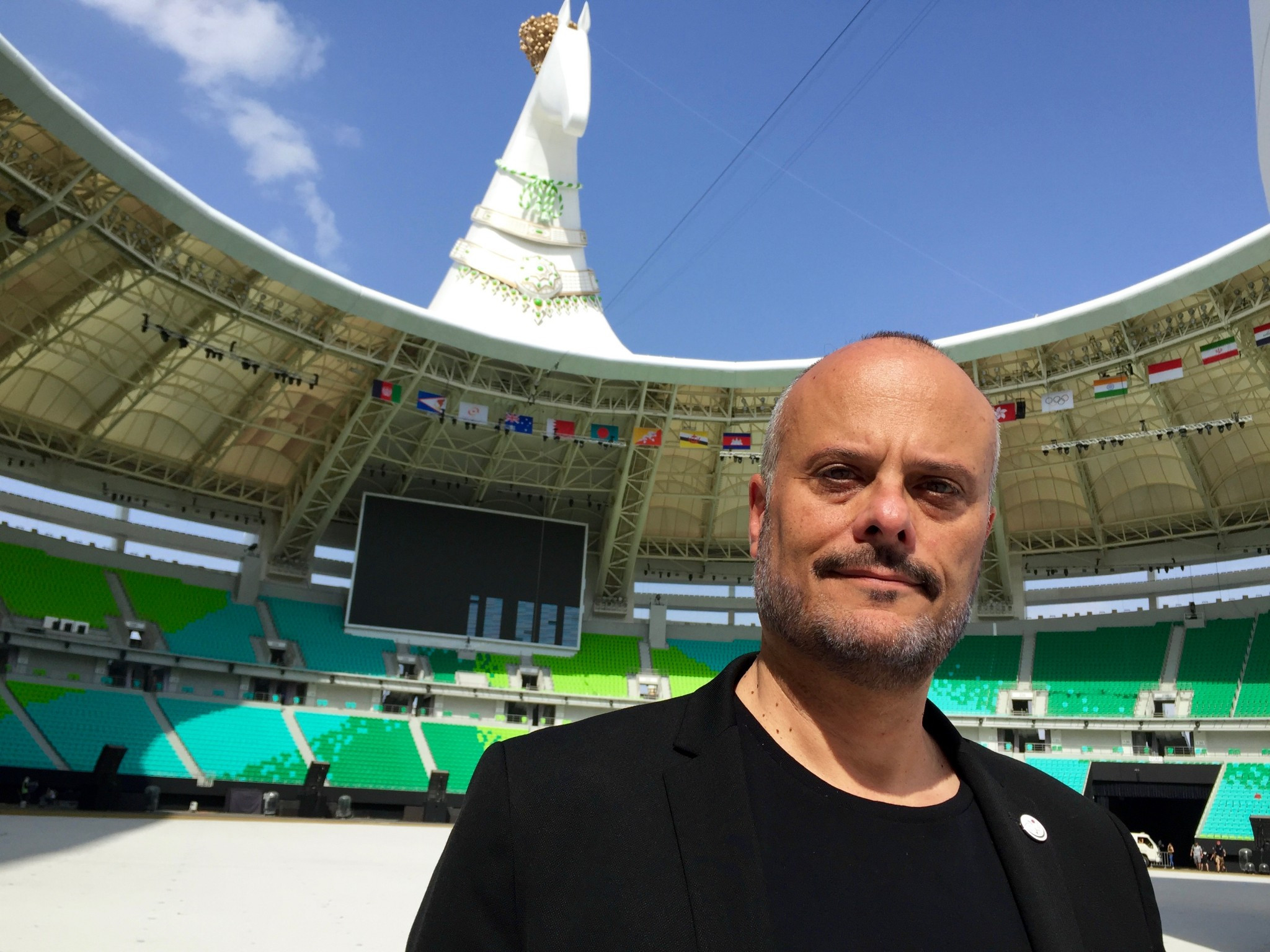 Organisers of the 2017 Asian Indoor and Martial Arts Games (AIMAG) have predicted that the Opening Ceremony of the event, scheduled to take place at the Ashgabat Olympic Stadium on Sunday (September 17), could go down as one of the greatest ever shows of its kind.

The ceremony is being produced by Milan-based company Balich Worldwide Shows, which has experience in performing the role at previous Olympic Games.

"I don’t know this for a fact, but we think this is the longest Games-type ceremony ever," Francisco Negrin, Balich Worldwide Shows’ creative director, said.

"Usually there’s an hour or an hour-and-a-half of artistic content, and then there’s an athletes parade.

"Here at Ashgabat 2017, there’s about two or two-and-a-half hours of artistic content.

"Which is a massive, massive length of show to stage, with a huge amount of people."

Negrin conceptualised and wrote the initial treatment for the show himself, eventually expanding and adjusting the programme in collaboration with the Turkmen Government and the various directors who lead departments such as choreography, digital projection and music.

"What’s important on a show this big is that you have to delegate so much – even from the creative side – to the different departments, because there’s just so much to do, and sometimes it’s very specialised," Negrin said.

"For instance, the mass choreography, there’s only maybe three people in the universe who know how to do it, and for that here we have Bryn Walters, who is amazing.

"So, the delegation is not difficult, but you have to make sure that everybody stays within the plan to ensure the integrity, the emotional impact, and the rhythm of the show."

While much of the specific content of the Ashgabat 2017 Opening Ceremony will remain a secret, Negrin was able to give us some hints as to what to expect from the show.

"When we first started this project and were speaking with the Ministry of Culture to gain ideas, one thing that was highlighted to us was that, throughout the country’s history, the Turkmen people have had the strength to endure their hardships and to rise again," he said.

"There is this great Turkmen poet Magtymguly Pyragy who predicted the Turkmen nation would rise one final time and become a very powerful nation.

"The President of Turkmenistan Gurbanguly Berdimuhamedov believes that that time is now, and that is the idea that the show is premised on, this idea of rising up."

Negrin also revealed some information about one of the segments that those watching the rehearsals have pointed out as perhaps the most exciting.

"People always talk to me about the ‘Sport Comes to Ashgabat’ segment," he said.

"First the performers representing the martial arts athletes arrive, followed by the other sports performers, some flying into the stadium before reenacting the pictograms of the sports with incredible mass choreography and very inspiring music.

"This for many people will be one of the most impactful pieces."

It has been nearly a three-year journey for Negrin and the Balich Worldwide Shows team in developing and producing the Opening Ceremony.

"I must say that when I first saw our thousands and thousands of performers come into the stadium, that was kind of a, 'My God, what have I gotten myself into?' moment,"Negrin added.

"But also it’s been remarkable to realise the sweetness and the sense of humour and warmth of the Turkmen people.

"As soon as you scratch the surface here you realise the warmth and the soul of the nation, and you realise that’s what the show we’re putting on is all about."

Balich Worldwide Shows will also produce the Ashgabat 2017 Closing Ceremony, which like the Opening Ceremony will be held at the newly-built Ashgabat Olympic Stadium.

The 45,000-seater venue, designed by Turkish construction company Polimeks, is the focal point of the Ashgabat Olympic Complex.

Ashgabat 2017 will be the fifth edition of the AIMAG.

There will be 21 sports contested across 15 venues over 12 days of competition.

More than 6,000 athletes and team officials will be representing 65 delegations

Ashgabat was awarded the Games by the Olympic Council of Asia (OCA) in 2010.

The fifth AIMAG Executive Committee will organise and run the Games in cooperation with the OCA.