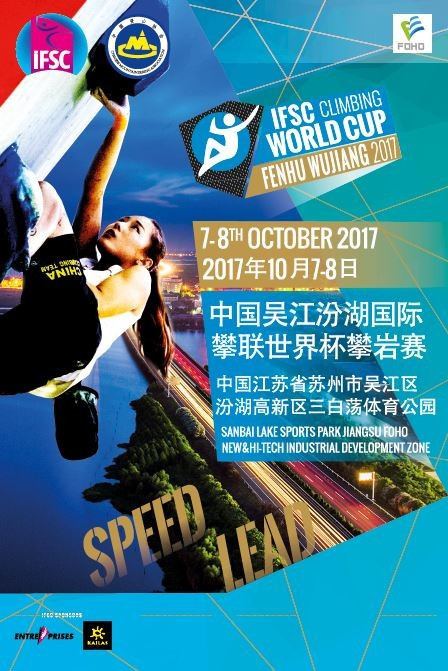 The latest leg of the International Federation of Sport Climbing (IFSC) World Cup series is scheduled to be held in Wujiang this weekend with lead and speed events taking centre stage.

It is the first of two events due to be held in China in quick succession with Xiamen set to host on October 14 and 15.

Russia’s Vladislav Deulin and Iran’s Reza Alipourshenazandifar have been the athletes to beat in this season’s men’s Speed World Cup.

Both athletes have topped two podiums, while Alipourshenazandifar recently came out on top at his home Asian Continental Championships in Tehran.

Speed legend and home favourite Qixin Zhong is also on the start list.

Last year, the women’s rankings came down to the final races.

The rivalry has continued this season with the two speed stars taking every gold medal between them.

Jaubert extended another winning streak to three legs in Edinburgh.

Kaplina’s fellow countrywomen Mariia Krasavina and Anna Tsyganova will try to catch the two frontrunners in Wujiang and Xiamen.

Other names to look out for are new Asian speed champion Puji Lestari of Indonesia and Asian combined and speed youth champion YiLing Song of China.

In lead, France’s Romain Desgranges and Slovenia’s Janja Garnbret currently head the respective men’s and women’s rankings having returned to the top of the podium in Edinburgh.

Desgranges has won three Lead World Cup events this year, while Garnbret has triumphed in all but one.

Another win each will crown them season champions if Italy’s Stefano Ghisolfi and South Korea’s Jain Kim, ranked second in the men’s and women’s rankings respectively, miss one podium.