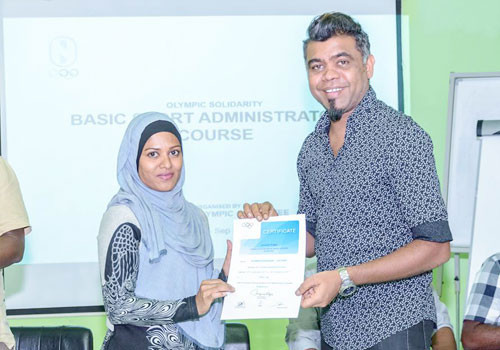 A sports administration course was held recently in Malé, capital of the Maldives, involving 29 participants from that city and Addu, a city in the south of the archipelago.

The ninth phase of the Basic Sports Administrators Course was organised by the Maldives Olympic Committee, in cooperation with Olympic Solidarity.

The sessions were led by National Olympic Committee instructors trained by Olympic Solidarity and they were aimed at staff and managers of affiliated National Sports Associations/Federations, sports clubs and other sports organisations.

The course exposed participants to the concept of the Olympic Movement, including its values, attitudes and philosophy of Olympic sports.

Information relating to the technical aspects of Olympic sports and athlete development was also presented.