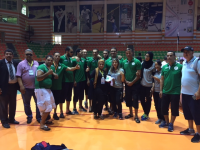 Algeria had double reason to celebrate at the close of the International Blind Sports Federation (IBSA) Goalball African Championships, with both the men's and women's teams retaining their titles with undefeated records in Sharm El Sheikh.

All ten Algerian goals were scored courtesy of Samir Bellabouchet.

In the women's final the same countries again clashed with Algeria winning 12-2 in a repeat of last year's showpiece game.

The first game of the final day was the men's bronze medal match between Morocco and Rwanda.

In the overall Championships, Bellabouchet scored 27 goals while in the women's Benallou bagged 40.

As a result of their success, the men's teams from Algeria and Egypt are through to the 2018 World Goalball Championships in Sweden.

The Algerian women's team caused controversy at the Rio 2016 Paralympics when they did not show up in time for their first two matches.

They were accused of not wanting to play against Israel, with which the country has no diplomatic relations.