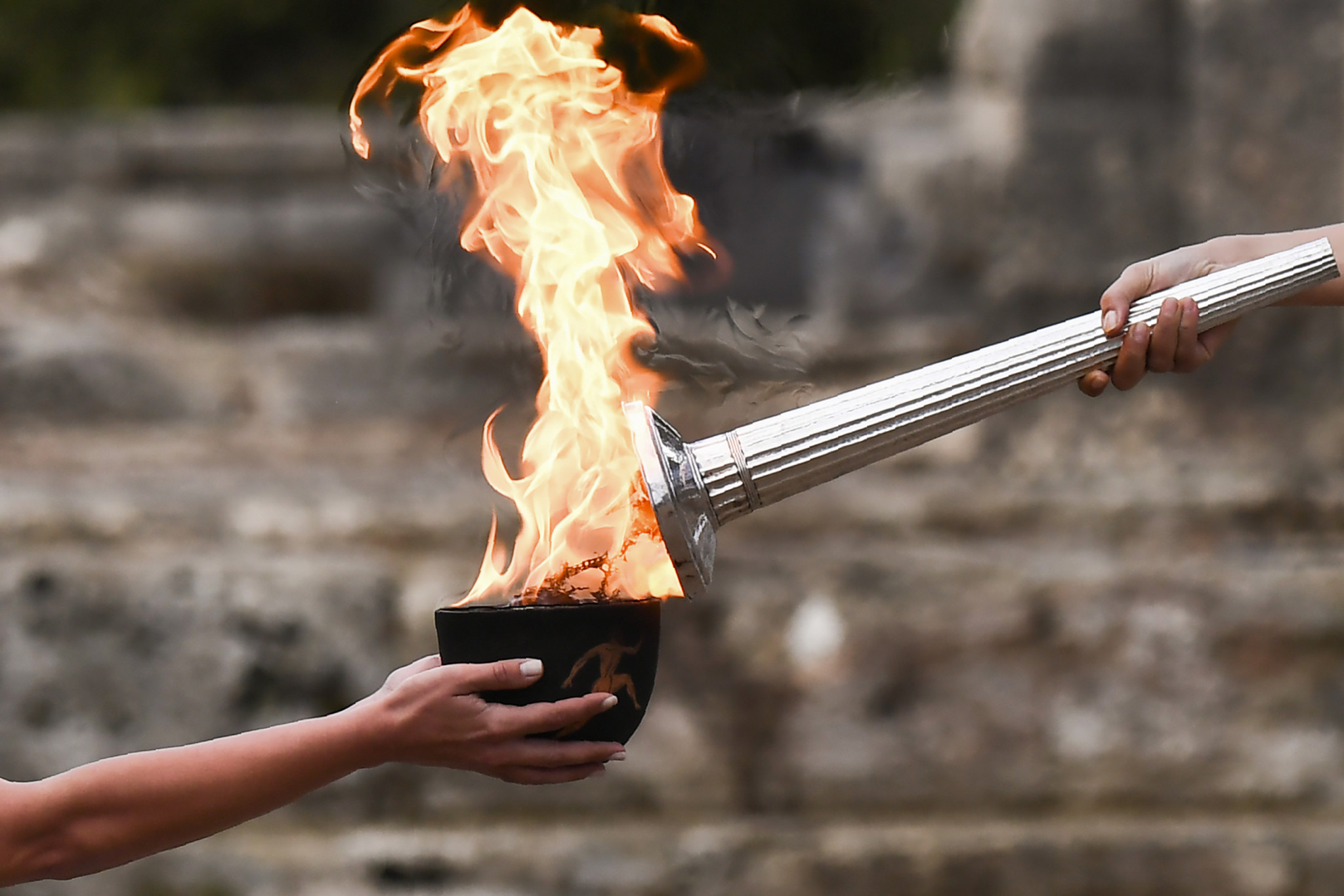 The Greek hosts here had promised "a magical journey to antiquity, history and mythology" and the ceremony to salute the lighting of the Olympic flame stirred the emotions at the site of the Ancient Games in Olympia.

The 26 priestesses, clad in the traditional Greek costumes of light turquoise laced with olive, emerged from the columns to the temple of Hera.

They performed a dance of the nymphs to the haunting and ethereal music of composer Yiannis Psimadas.

Then the high priestess, played by actress Katarina Lehou, appeared to light the flame and offer an incantation to the ancient spirits.

"Apollo, king of the sun and the idea of light, send your rays and light the sacred Torch for the hospitable city of Pyeongchang," she said.

"And you Zeus, give peace to all peoples on earth and honour the victors."

The procession of the priestesses to the stadium was through an avenue of heralds.

These were young men clad in tunics of olive green, who assumed poses to represent the sports of antiquity.

One traditional element restored to the ritual this time was the "amphithalis pais".

In ancient civilisation, the presence of a young boy with both parents alive was considered a portent that a marriage would prosper.

Young Georgios Pavlopolous was entrusted with cutting an olive branch, to be presented to the first runner.

Back in the stadium, spectators were able to watch proceedings on a big screen, and the television pictures included images provided by a drone which buzzed above the temple during the ritual.

This was written by Spiro Samaras, a musician from Corfu, for the first modern Olympics in 1896.

On this occasion it was accompanied by piano.

The youngsters, smartly dressed in white with red trimmings, had also learned the South Korean national anthem which they performed with aplomb as the country's flag was raised alongside that of Greece to represent the origins of the Olympic Games.

The culture of the Olympic Movement has always been a key part of this ceremony.

The recitation of "Light of Olympia", a poem by the late Takis Dokis, has been part of the ritual since 1964, coincidentally the first year the flame for the Winter Games was actually lit in Olympia.

"They stand above and beyond all the differences that divide us.

"In our fragile world that seems to be drifting apart, the Olympic Games have the power to unite humanity in all its diversity.

"In our fragile world where isolation and mistrust are growing, the Olympic Games always build bridges and friendship."

Bach invoked the words of Pierre de Coubertin, the driving force behind the revival of the Olympic Movement, who died 80 years ago this year.

"As our founder once said, the Olympic Games are a pilgrimage to the past and an act of faith in the future," the German said.

Bach acknowledged the presence of National Olympic Committee leaders from South Korea, Japan, China, France and the United States at the ceremony.

"Together they represent the future hosts of the Olympic Games," the IOC President said.

"What better expression of this faith in the future.''

When the time came for the Relay to begin, the first runner, Angelis, was invited forward.

"This is a very significant moment for us," said Lee Hee-beom.

"The wait is over.

"Our nation was filled with the passion built from memories of the 1988 Olympic Games held in Seoul.

"The Pyeongchang Games are an Olympics of peace and harmony.

"This is especially significant to Korea."

Capralos said the flame "has always had a special place for us Greeks".

"It is a unique opportunity for the Olympic and sport movement to focus on peace, so much more at the time when the drums of war are loudly echoing in many areas of the world," he said,

The flame was passed by the high priestess, using a special silver Torch modelled on the columns of the ancient temple in Olympia.

Angelis held the first of the specially designed Torches for Pyeongchang.

After running to pay homage at the nearby Coubertin memorial, Angelis passed the flame to Park, the first Korean bearer.

He carried it on the road towards Olympia in the shadow of Mount Kronos.

The emotion on both their faces was clear to see and will be repeated many times over.

Almost 30 years ago, South Korea's legendary 1936 marathon champion Sohn Kee Chung had fallen to his knees at the sight of the flame in Olympia as the Relay began towards Seoul.

Now the destination is South Korea once more.

In all, 505 runners will carry the flame in Greece as it visits some 37 communities.

By the time it reaches Athens for the formal handover to Pyeongchang 2018 next week, it will already have covered 2,129 kilometres.