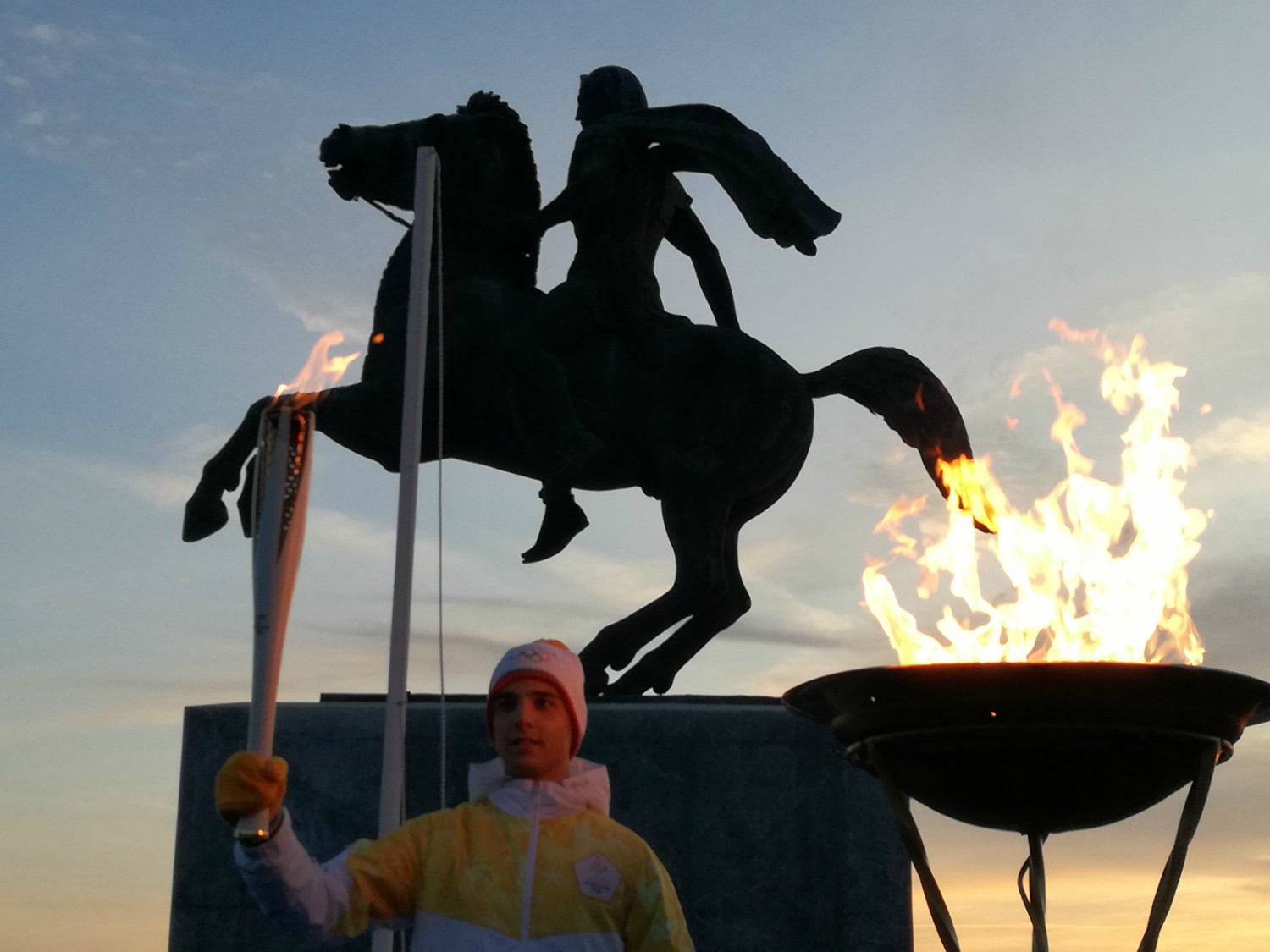 It is already day five for the Torch Relay for next year's Winter Olympic Games in Pyeongchang which now heads south towards Athens.

By the time it reaches there it will have covered 2,129 kilometres in Greece alone and been carried by 505 Torchbearers.

It burned last evening in the setting sun before a statue of Alexander the Great in the Northern city of Thessaloniki, lit by teenage slalom skier Manos Zografos.

Today it visited Drama before arriving finally in Naousa for another overnight stop.

The journey of the flame through Greece has happened ever since the first Torch Relay in 1936 when it travelled to the Olympic Games in Berlin.

"Only the sick stayed at home," said a report of the time.

You would think that the locals might be a little blasé about an event they witness every two years but, judging by the crowds who turn out to watch it arrive, the flame still has the power to inspire, unite and bring a smile to the face.

Greek organisers claim locals have turned out in their thousands and schoolchildren all week have been waving Korean, Greek and Olympic flags.

The great Olympic symbol is familiar to the youngsters.

Many schools have the rings painted on their walls outside and some even have the Olympic pictograms.

In Kastrina, they had an authentic local hero to cheer.

The Cauldron was lit by 2012 Olympic lightweight double sculls bronze medallist Christina Giazitzidou, just as she had done before Rio 2016.

Carrying a Torch is becoming as familiar as a good stroke pattern.

Five years ago she had also brought the flame to the Panathanaiko Stadium for the handover to London 2012.

For 1992 Olympic 100 metres hurdles champion Voula Patalidou, the sensation must be a familiar one.

There have been other occasions since but the sheer joy of doing so never fades.

Other Torchbearers have been leading members of sports organisations, such as Kostas Georgiadis, dean of the International Olympic Academy.

The Torch Relay was also open to applications from members of the public.

The rugged Greek countryside has been a dramatic backdrop to the journey.

In Edessa, spectacular waterfalls offered a contrast with the flame and a more natural echo of the Sydney 2000 Opening Ceremony, when Cathy Freeman stood beneath a man-made cascade of water.

The Cauldron used at each nightly stopover is a classical Greek tripod.

It is transported from place to place on the back of an official car, part of a cavalcade of 11 vehicles which accompanies the Relay.

Many of those who make sure it keeps to the timetable are volunteers who take time off from their jobs for this special week.

Some have been been accompanying the flame in Greece for well over a decade.

The man who masterminds the whole thing, Torch Relay Commission President Thanasis Vasileiadis, was also a bearer this time.

Early in the Relay they visited Ioannina, home town to the man who started it all off, cross-country skier Apostolos Angelis.

When it left the town, runners carried it along the shores of of Lake Pamvotida, continuing the journey to the town of Grevena.

One of the Torchbearers in Agrinion would have been familiar to those who had witnessed the lighting ceremony.

Yannis Psimadas, the composer of the music used at the ceremony, participated using a drum.

The weather had dominated the agenda in the days before the Relay and returned to do so in the early afternoon of the first day.

Heavy rain dogged the progress of runners as they headed towards Pyrgos and the port of Patras, some two hours from Olympia.

But, as it crossed the Rio Bridge to Antirrio the following morning, passing a statue of an unknown Olympic Torchbearer, blue skies and temperatures in the high 20s have returned.

Even the Greeks admit this is a bonus.

Tomorrow the flame is due to arrive in the historic city Delphi up here in the hills, its final stopover before reaching Athens.

Organisers hope the clouds and rain which are currently enveloping the site will clear.

It is one of three archaeological sites on the itinerary and the backdrop may well be familiar with Olympic film enthusiasts.

In 1936, German film director Leni Riefenstahl shot her opening sequences here among the dramatic columns because conditions at the actual lighting in Olympia had not yielded the images she wanted for her classic film of the Olympic Games in Berlin.

Although the flame used for this current Relay was lit in Olympia, it was one kept in reserve from the practice sessions.

The public were permitted to to watch the rehearsals held in the ancient archaeological site .

Those who were there for the practice on Monday (October 23) witnessed the real flame being lit.

That is something that Thomas Bach and Prokopis Pavlopolous, respective Presidents of the International Olympic Committee and the Hellenic Republic, are unable to claim this year.