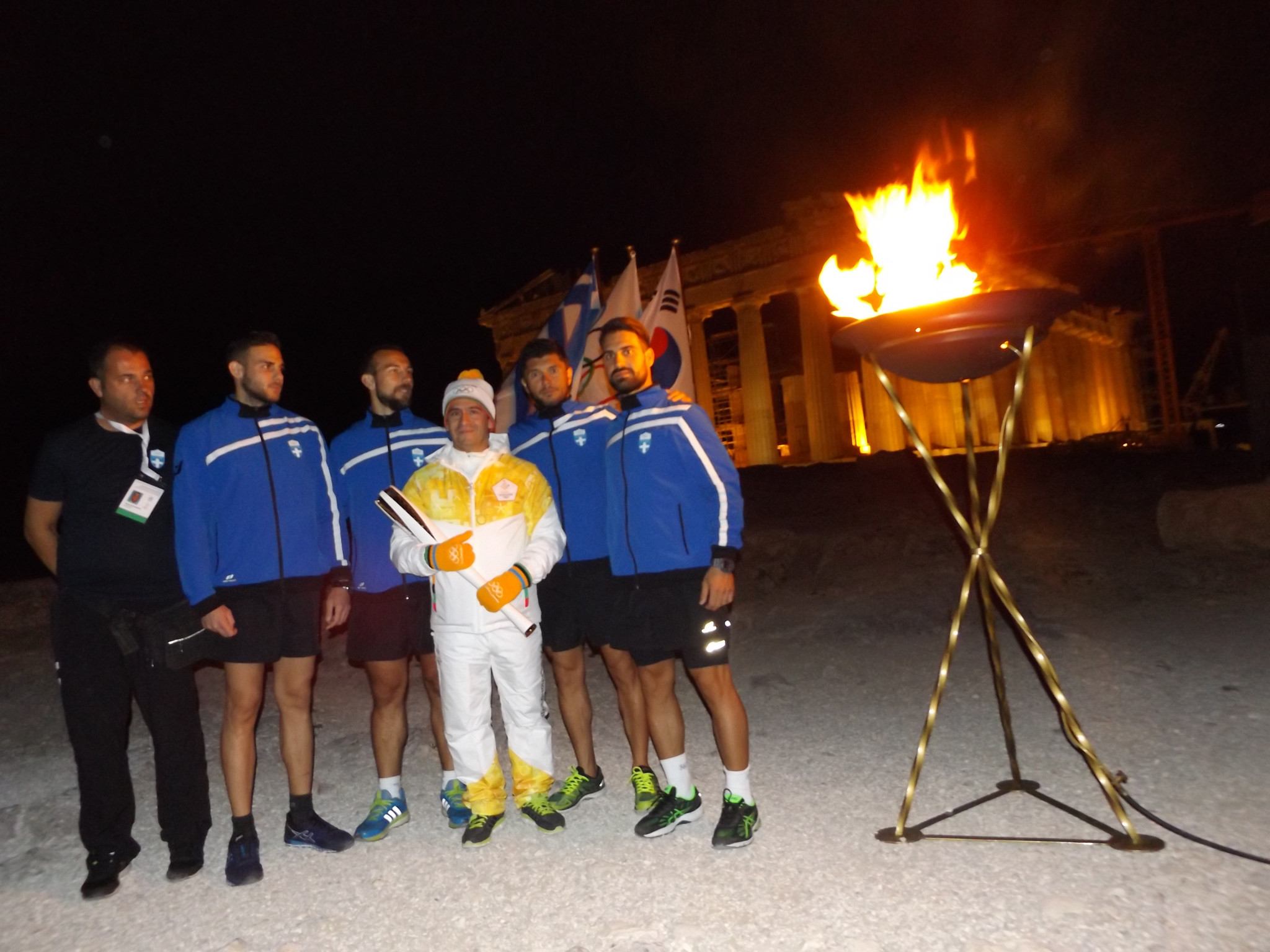 As the lights of Athens flickered in the distance, the Olympic flame for Pyeongchang 2018 burns on the Acropolis Hill beneath the Parthenon.

It was lit by Athens 2004 Gymnastics gold medallist Dimosthenis Tampakos after a succession of bearers had carried the flame up the hill to the archaeological site.

The columns of the Parthenon illuminated in a golden light to create a dramatic backdrop.

‘’From my life as a gymnast, these two moments were the strongest and most emotional of my whole athletic career - winning the Olympic gold medal and carrying the Torch,’’ Tampakos said.

‘’Always the emotion is strong.

"It symbolises something that remains unaffected by time.

"The Torch Relay also symbolises that united we can move forward together and make progress.

"This has been moved from place to place another with cooperation between so many people with one common goals.’’

It is perhaps appropriate that Olympic champions on the rings have now played prominent roles in the last two Torch Relays.

This day had begun for the Torch Relay some 10 hours earlier when ultra-triathlete Konstantinos Zemadanis defied jet lag to begin the journey from the temple of Apollo in Delphi.

"This is the most important moment of my life.

"I just came from a competition in Mexico and have only been here a few hours.

"It was a symbolic distance and I am very happy."

The runners headed along the mountain path on an undulating road beneath the plateau of Parnassus as the convoy made its way slowly towards Athens.

Darkness had fallen by the time the runners reached the approaches to the Acropolis.

The Athens Police have to guard the flame as it burns overnight.

Back in 1936 when the flame first visited here, runners had been challenged by a guard wearing ancient costume.

The Torch departs on Tuesday to make a short final journey around Athens to arrive at the Panathinaiko Stadium for the official handover at around 11am local time.

Korean skating star Yuna Kim has flown in for the ceremony which has a strong Korean theme.

Like the first Torchbearer Ji Sung Park, she is a Pyeonchang 2018 ambassador.

The ceremony begins as Evzones, the Presidential guard march in as the escort to President of Greece Prokopis Pavlopoulos.

The final Torchbearers arrive with the flame and will include Korea’s Kim Gi Hun, a double short track gold medallist at Albertville 1992 who won further gold in Lillehammer.

He will pass the flame to Ioannis Proios, a downhill skier from Greece who lights the special golden cauldron in the centre of the stadium.

The 26 priestesses then perform their dance.

In recent years they have attempted to weave something into the music that reflects the host city.

In London there were phrases from John Lennon’s "Imagine" and for Rio, "Cidade Maravilhosa".

Each drew appreciative gasps from those in the host cities.

Incidentally, choreographer Artemis Ignatiou was a Torchbearer on Acropolis Hill and clearly delighted to do so, even though she carried the flame for London 2012.

There will also be music and dance from Korea in an echo of the 1988 relay, when the Seoul City dance company travelled with the flame in Greece.

The theme song for the Torch Relay will also be performed.

Back in 1988, the Olympic song "Hand in Hand" by Georgio Moroder, perfomed by Koreana, became a world-wide hit and organisers will hope for a similar impact this time.

It is placed in a safety lamp and passed on Pyeongchang 2018 President Lee Hee-beom.

This is the formal moment of handover.

The ceremony will also include a display by Olympiada Thakomakedomon, a group of 90 gymnasts who will perform "The Wolves and the Moon", an appropriate title perhaps for Hallowe'en.