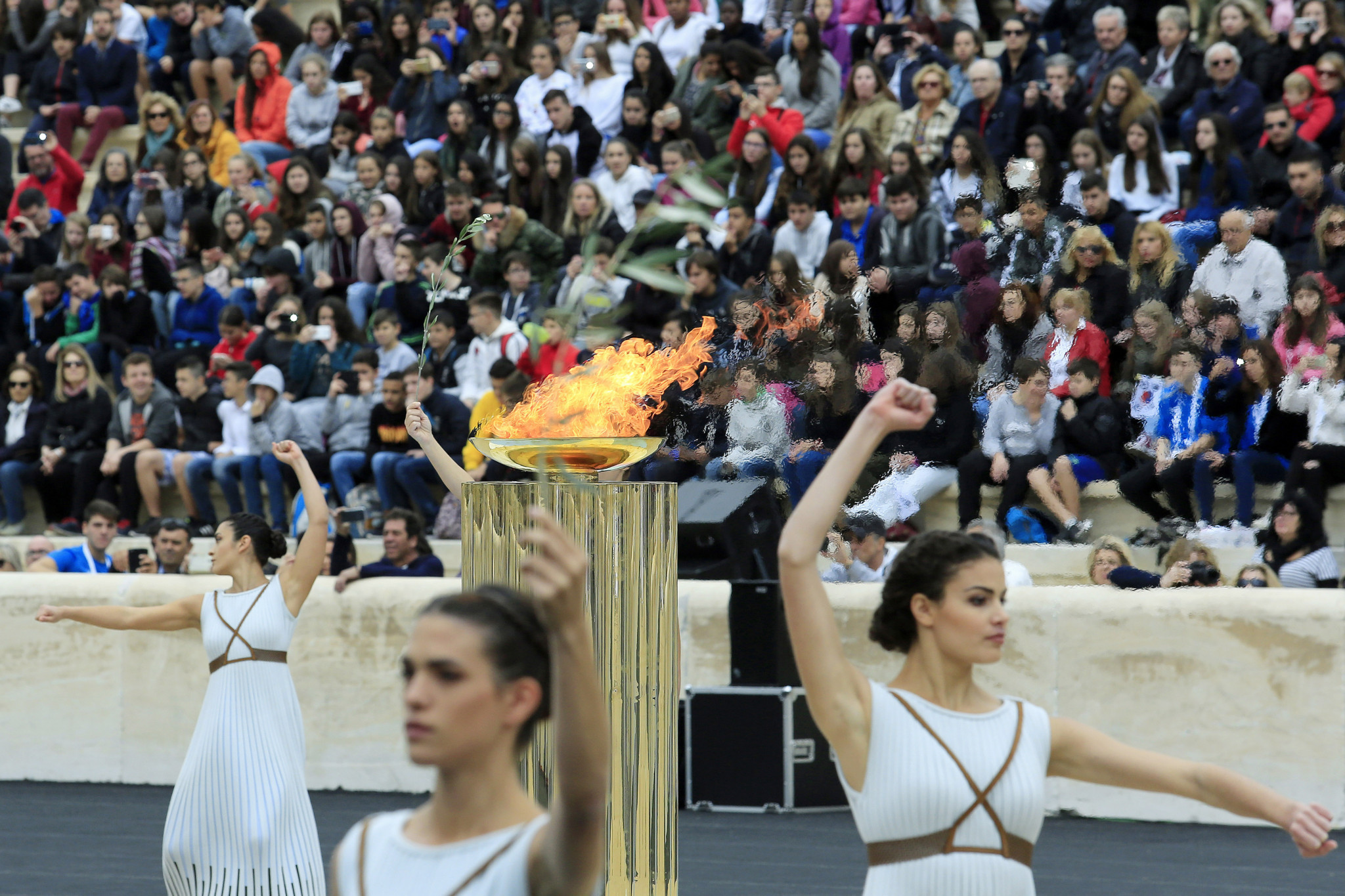 ‘’Let Everyone Shine’’ The 2018 torch song made its Olympic and international debut in the historic Panathinaiko Stadium in Athens on Tuesday as the flame was formally handed over to Pyeongchang 2018 Organising Committee (POCOG) President Lee Hee Beom.

It is a catchy modern take on traditional Korean music and was performed by Park Ae Ri and husband ‘’Poppin’’ Hyun Joon, who delighted the many schoolchildren in the crowd with his energetic dancing.

The group were backed by dancers in traditional costume.

‘’The theme will unite the nation and help share the Olympic spirit as the flame makes its way across Korea,’’ said POCOG Cultural director Kim Dae Hyun.

The music is targeted at ‘’achievers and dreamers ‘’ and primarily aimed at the domestic market to promote the 100 day torch relay.

Only the rather catchy chorus is in English

‘’Let everyone shine and shine, all the time.’’

It has also been recorded for a promotional video on the torch relay by Korean R&B star Insooni.

She will perform it at ‘Pride of Korea,’ a three day series of special concerts in Seoul to promote 100 days to go to the Winter Games.

‘’Music has the power to connect people together, just like sport does. This is a special moment where the two have come together,’’ said Insooni.

The Athenians certainly gave the song the thumbs up but then they are no strangers to torch songs. They had their own in 2004 for the international event to celebrate the Athens Olympics.

‘’Pass the flame , unite the world’’, written by Trevor Horn and Lol Creme, was a popular accompaniment to a journey through every city that had previously staged the Games.

The song was in Greek and English was sung by Yiannis Kotsiros.

In Sydney, John Norman’s composition The Flame was sung by Tina Arena at the 2000 opening ceremony.

Songwriters for the winter Games have also featured the greatest symbol of the Games.

The Norwegian singer Sissel Kyrkjebo performed Svein Gundersen’s composition Se Ilden Lyse ‘’Fire in your Heart’’ the theme for the Lillehammer 1994 Games and recorded the English version with Placido Domingo.

In 2002 Leanne Rimes sang ‘Light the Fire’ within with the Utah Symphony orchestra and the choristers of the Madeline Cathedral school Choir .

It became one of the most memorable soundtracks of an emotional Salt Lake Winter Games in the wake of 9/11.

Korea has a bit of form in the Olympic song stakes.

In 1988 they brought us ‘Hand in Hand’ written by Georgio Moroder and Tom Whitlock.

In 1988 the Koreans launched perhaps the most famous Olympic song of all:  ‘Hand in Hand’ by Georgio Moroder and Tom Whitlock.

It was performed by Koreana.

‘’The song hand in hand is still very famous here and reached the top of the charts’’ POCOG President Lee Hee Beom told Inside the Games.

’’It was one of the biggest Games ever and helped to harmonise East and West’’ he said.

The song retains its popularity to this day and Korean Kpop group I.O.I recorded a cover version in 2016.

'Hand in Hand' is is even credited with bringing down the Berlin Wall.

When the protest movements in Eastern Europe reached their height, the refrain ‘’Hand in Hand we stand, all throughout the land, breaking down the walls that come between us for all time’’ became an anthem for those who demanded change.

When it was released in 1988 , there was also some tension between the two Koreas, so if the message of ‘’Let Everyone Shine’’ could penetrate beyond Panmunjom, everyone will be delighted.