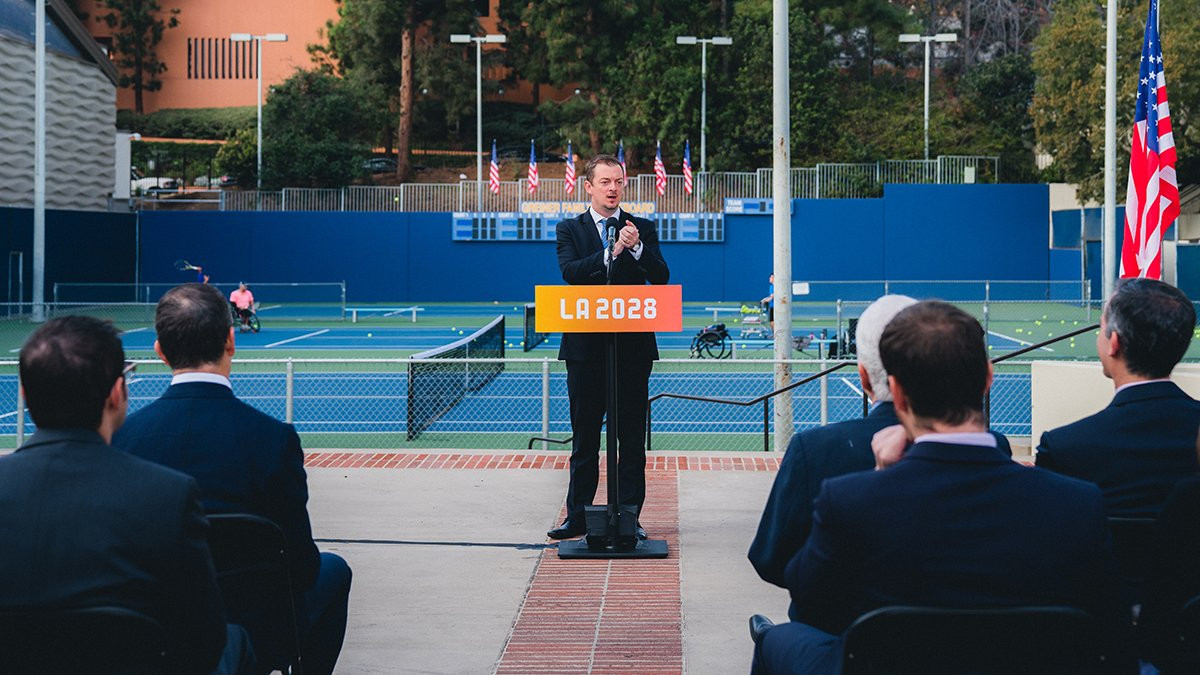 International Paralympic Committee (IPC) President Andrew Parsons has said the organisation sees Los Angeles 2028 as an opportunity for the Paralympic Movement because of the Organising Committee’s desire to "make a difference".

Parsons was speaking at a press conference during his first visit to Los Angeles since his election as IPC President in September.

He is joined on the trip by IPC vice-president Duane Kale and IPC chief executive Xavier Gonzalez.

Today, the IPC delegation toured the University of California, Los Angeles (UCLA), the home of the 2028 Paralympic Village.

"I think that two words that describe my feelings at this moment are opportunity and commitment," Parsons said.

"We see LA 2028 as an opportunity for the Paralympic Movement, because we, since the bid phase, realised that LA 2028, wants to make a difference.

"It wants to organise the Games in a different way.

"They maybe want to become a blueprint for future Organising Committees and for future cities.

"It’s a huge opportunity for us to have 10-and-a-half years to work with you guys and think outside the box, come up with new approaches, new ways of seeing the Paralympic Games, new ways of measuring legacy and new initiatives.”

Kicking off a great day in LA as #UCLA, home to #LA2028's Athlete Village, welcomes a visit from @Paralympics President Andrew Parsons and celebrates @TeamUSA athletes at the 2017 #TeamUSAAwards 🎉 pic.twitter.com/2Ukv44eHFV

Parsons believes the 2028 Paralympic Games also presents a chance for Los Angeles in terms of changing perceptions of people with impairment.

"We think that together we can benefit the city, change the way not only Los Angeles but the whole of South California, the US and why not the world perceive persons with an impairment," the Brazilian added.

"It’s by working with the youth, with the citizens, with education.

"Using the Games as an opportunity, as a catalyst is the only way that we will achieve that so we have to work in partnership to make the Games serve LA and the whole of Southern California.

"Southern California is also known for its creativity, its passion for innovation and that’s what we want to see in the Paralympic Games.

"And then the second word commitment.

"I am so excited about what we have just discussed.

Although Los Angeles will become only the second city to host the modern Olympics three times in 2028, Garcetti claimed he is equally excited, if not more, that the city will be hosting the Paralympic Games for the first time.

"This is a campaign that begins today and actually it began when we started pursuing the Paralympic Games," he said.

"To transform this city, its heart, its people - not just about accessibility, as we discussed, but the idea that all of us live our lives full of impairments.

"The sport world teaches us that it is when we dig deep inside our souls, inside our spirits that we can accomplish anything and we can be equals on the playing field, that it isn’t about whether we win or lose, it’s how we compete in our lifetime here.

"And we are going to use this City of Angels' creativity and innovation to boost Paralympic sport not just in Los Angeles but around the world.

"That is our promise to you."

Tomorrow, the IPC delegation will meet with Stephen Simon, executive director of the City of Los Angeles’ Department on Disability.

The IPC delegation’s visit will conclude with a tour of the Los Angeles Memorial Coliseum, LA 2028’s Paralympic track and field venue.

Influenced by first-hand input from Paralympic athletes, LA 2028 claims it is fully committed to delivering a phenomenal experience for all athletes and attendees at the 2028 Paralympic Games.

"The 2028 Paralympic Games will benefit from the same four Sports Parks, Village at UCLA, and other world-class venues as the Olympic Games, offering the greatest stage to showcase the world’s best athletes and change societal perceptions about disabled persons," a statement from the Organising Committee reads.