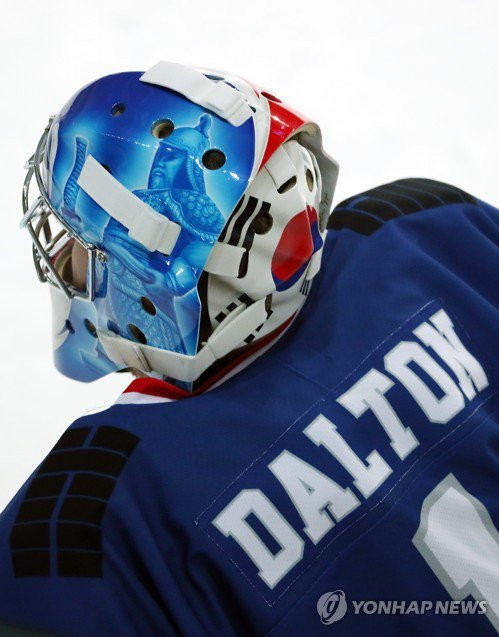 South Korea's ice hockey goaltender Matt Dalton has been told by the International Olympic Committee (IOC) that he must remove an image of an admiral from his mask for Pyeongchang 2018.

The Canadian-born goalie, who has been naturalised by South Korea so he can take part in these Olympic Games, must now change his mask.

Dalton had been wearing the national flag of his adopted country at the back of his mask and on the left side of an image of Admiral Yi Sun-shin, a legendary Korean naval commander from the 16th century best known for a victory over Japan in 1597.

The IOC have ruled, however, that Dalton is breaching its rules.

Rule 51 of the Olympic Charter states: "No kind of demonstration or political, religious or racial propaganda is permitted in any Olympic sites, venues or other areas."

The 31-year-old Dalton, who has previously played for National Hockey League side Boston Bruins and Kontinental Hockey League HC Vityaz from Russia, revealed the IOC's decision after playing for South Korea in their 3-1 defeat against Kazakhstan in an Olympic warm-up match.

"I wanted to keep it the way it was, obviously."

Relations between South Korea and Japan have deteriorated recently because of a row caused when Seoul undermined an agreement signed in 2015 that was supposed "finally and irreversibly" to have settled a dispute over "comfort women" - South Koreans forced during the war to work in Japanese military brothels.

Dalton revealed that he decided to put Yi's image on his mask after seeing the Admiral's statue at Gwanghwamun Plaza in Seoul.

Naturalised as a South Korean in 2016, Dalton also has images of his new country's national flag on both of his pads and his blocker.

"Our equipment staff is going to take care of it," Dalton told Yonhap News.

"We're going to fix it somehow.

"It's disappointing that it has to be covered up."

The IOC regularly impose the Rule in the Olympic Charter about athletes using their uniforms to make statements, including at Sochi four years ago.

Then there were protests in Norway and Sweden after the IOC complained when four Norwegian skiers wore black mourning binds in honour of team-mate Astrid Uhrenholdt Jacobsen's brother who had died unexpectedly on the opening day of the Olympics.

Also, at Sochi 2014, Ukrainian athletes asked for and were refused permission by the IOC to wear black arm bands to honor those killed in the violent clashes in Kiev the previous day.