A post on the Facebook page of the International Ice Hockey Federation (IIHF) which referred to Team Russia competing at the Winter Olympic Games and used the Russian flag on four occasions has been amended.

The post did not refer to the fact that Russia are participating neutrally under the Olympic Athlete from Russia banner and was consequently a violation of International Olympic Committee (IOC) rules on the country's eligibility.

"This post is part of a promotional women’s ice hockey campaign that was built and scheduled prior to the OAR team creation," an IIHF spokesperson told insidethegames.

"We are going to adjust the text to conform with IOC directives."

Russia are competing under the OAR banner due to "systemic manipulation" which supposedly existed across sports, including ice hockey, at Sochi 2014.

The IIHF declared its support for Russia competing at Pyeongchang 2018 in November and criticised the IOC for putting the sport "at risk". 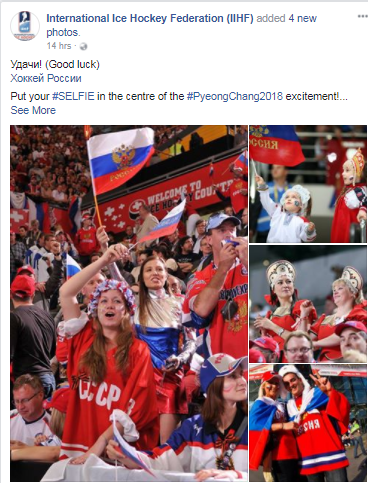 They have taken no action against members of the Russian ice hockey team at Sochi 2014 despite eight of them - Ekaterina Lebedeva, Ekaterina Pashkevich, Tatiana Burina, Anna Shchukina and Ekaterina Smolentseva, Galina Skiba, Anna Shibanova and Inna Dyubanok - being retrospectively disqualified and suspended by the IOC for doping.

Five of these - Lebedeva, Pashkevich, Burina, Shchukina and Smolentseva - have had their suspensions overturned by the Court of Arbitration for Sport.

"I believe that tweet (sic) has been amended and you will understand there are a lot of problems with coordination when there is a new system," said IOC Presidential spokesperson Mark Adams today.

"But you will understand there is no Russian team here.

"There is no Russian flag and no Russian anthem and this was agreed in consultation with our NOCs (national Olympic Committees) and International Federations.

"The IOC Executive Board decision on December 5 was taken in consultation with all International Federations including the winter sports.

"We are happy that all of the stakeholders have signed-up and agreed to that."