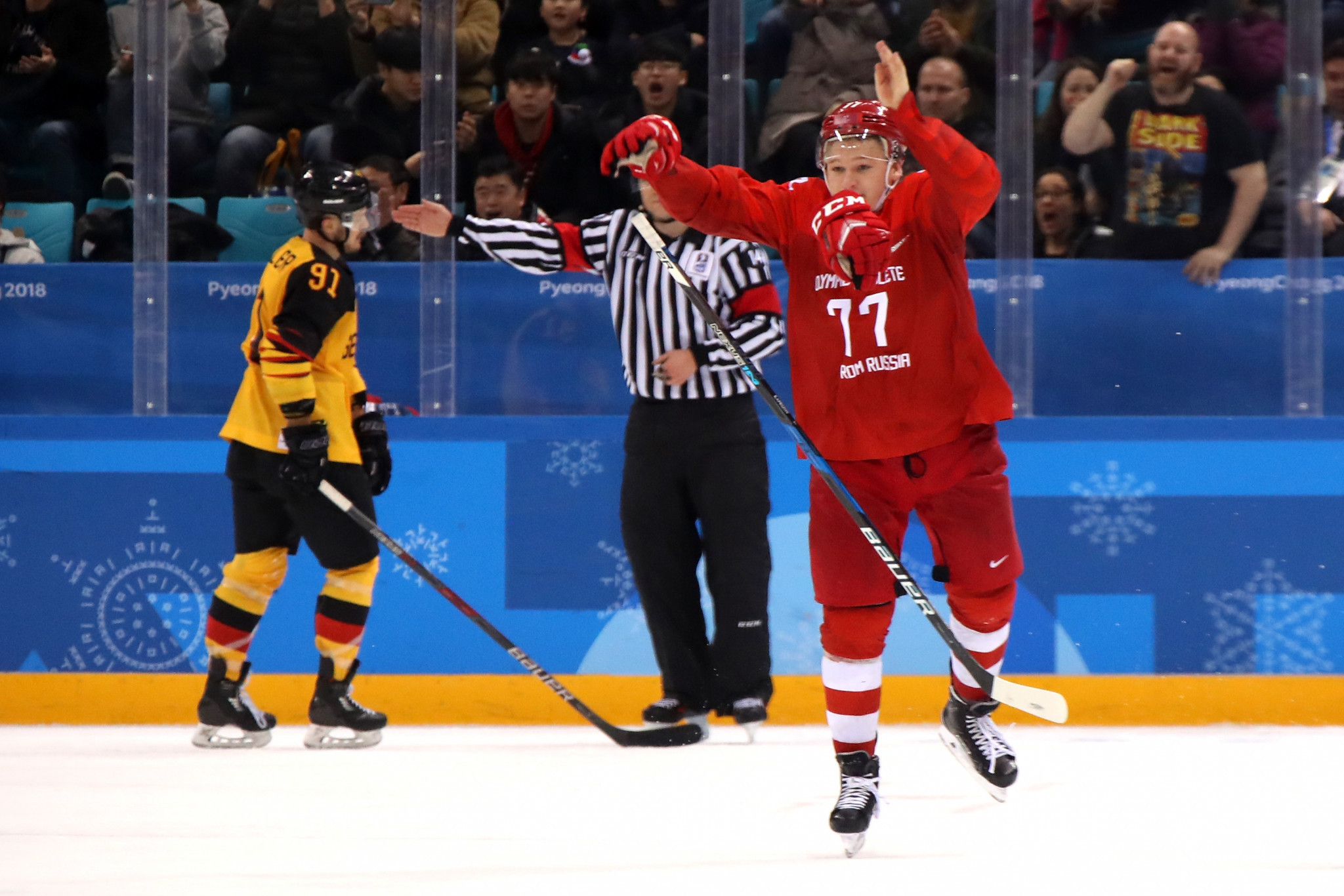 Kirill Kaprizov scored an overtime winner as the Olympic Athletes from Russia claimed victory over Germany in the men's ice hockey final here at Pyeongchang 2018.

The 20-year-old scored the decisive powerplay goal with just over 10 minutes of overtime remaining.

The match had finished 3-3 in regulation time after OAR’s Nikita Gusev scored an equaliser with less than a minute left on the clock.

Victory marked a rare moment of celebration for the country at these Games after they were forced to participate as neutrals as part of an International Olympic Committee (IOC) sanction for the nation's "systematic manipulation" of the anti-doping system at Sochi 2014.

It earned OAR their second gold of Pyeongchang 2018, following on from Alina Zagitova’s triumph in the women’s singles figure skating event, and 17th overall.

It was the first time since the CIS (Commonwealth of Independent States) team triumphed at Albertville 1992 that a team from Russia had won the Olympic title.

The players received their gold medals during a ceremony where Russian flags and the national anthem were both absent.

They took it upon themselves, however, to sing the national anthem in a move which broke the IOC's set of "conduct guidelines" for the OAR team published last month.

Athletes on the OAR team had been urged to "refrain from any public form of publicity, activity and communication" associated with the flag, anthem, any emblem, including that of the suspended Russian Olympic Committee (ROC), on any Olympic site or on social media.

Fasel claimed in December that Russia's negative reaction to the IOC's decision to force the country to compete neutrally was justified.

Both he and Heidemann were accompanied by Vladislav Tretiak, President of the Russian Ice Hockey Federation, and fellow IIHF Council member Franz Reindl.

The two teams were all square at 1-1 going into the final period after Germany's Felix Schutz cancelled out Vyacheslav Voinov's first-period opener.

In the frantic end to normal time, Nikita Gusev put OAR 2-1 ahead with less than seven minutes remaining, only for Germany to equalise 10 seconds later through Dominik Kahun.

Jonas Muller then made it 3-2 to Germany with three minutes and 16 seconds left on the clock but Gusev scored for a second time to equalise inside the final minute.

Kaprizov's winner came in the 70th minute of a cagey overtime period, after Germany's Patrick Reimer had given away a penalty for high sticking.

"When you play for your country, it is more important," OAR's Pavel Datsyuk said.

"It feels good but I have accomplished my dream.

The final came on the same day that it was confirmed that Russian athletes will not be allowed to march under their own flag at the Closing Ceremony of Pyeongchang 2018.

In return, the ROC is set to have its suspension lifted soon after the Games finish.

This compromise agreement, which was revealed beforehand by insidethegames, was hammered out during almost four hours of painful negotiation yesterday at an IOC Executive Board meeting and then at informal discussions at the Olympic Club here which continued on into the early hours.

The country's flag will not be present at the Closing Ceremony but the ROC will have its suspension lifted as soon as it is confirmed that no additional positive cases are incurred by OAR at Pyeongchang 2018.