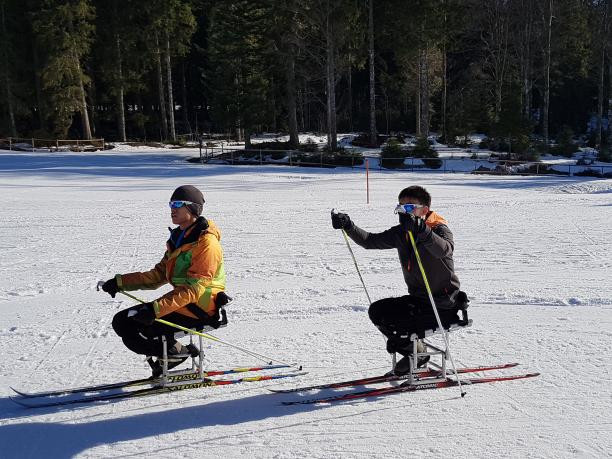 North Korea has announced that they will send athletes to the Pyeongchang 2018 Winter Paralympics, which begin next week.

The news, reported by Yonhap, was announced by South Korea's Unification Ministry in the host nation.

North Korea has offered to send 20 delegates, including six athletes, to the Games in South Korea and they are expected to travel via a land route.

It will be the first time they have participated at a Winter Paralympics.

The group for the Games is a reduction in the 150-strong delegation suggested at inter-Korean talks last month.

An art-troupe and cheerleaders, as seen at the Pyeongchang 2018 Winter Olympics, were not mentioned today.

According to Yonhap, the Ministry said: "North Korea seems to think that it has already partly contributed to an improvement of inter-Korean ties by sending an art troupe and a cheering squad to the Pyeongchang Olympics."

The International Paralympic Committee (IPC) had previously invited two skiers from North Korea to compete, but the country has now proposed another four athletes.

One of the officials attending the Paralympics could be former table tennis player Ri Pun-hui, an official at North Korea's Sports Association for the Disabled.

Following the IPC's invitation to North Korea, the two Para Nordic skiing slots were expected to be taken by Jong Hyon Kim and Yu Chol Ma.

North Korea sent a 500-member delegation to the Winter Olympics in Pyeongchang this month, with relations between the two Koreas said to have thawed during that time.

Athletes from both Koreas marched out under a unified flag with their Southern counterparts at the Games' Opening Ceremony in a show of solidarity, whilst there was also a unified Korean women's ice hockey team.

Tensions have been high on the Korean peninsula with the North pressing ahead with a nuclear progamme and missile launches despite widespread condemnation from western countries.

There has been strained rhetoric between American President Donald Trump and North Korean leader Kim Jong-un.

The Pyeongchang 2018 Paralympic Games will take place from March 8 to 18.