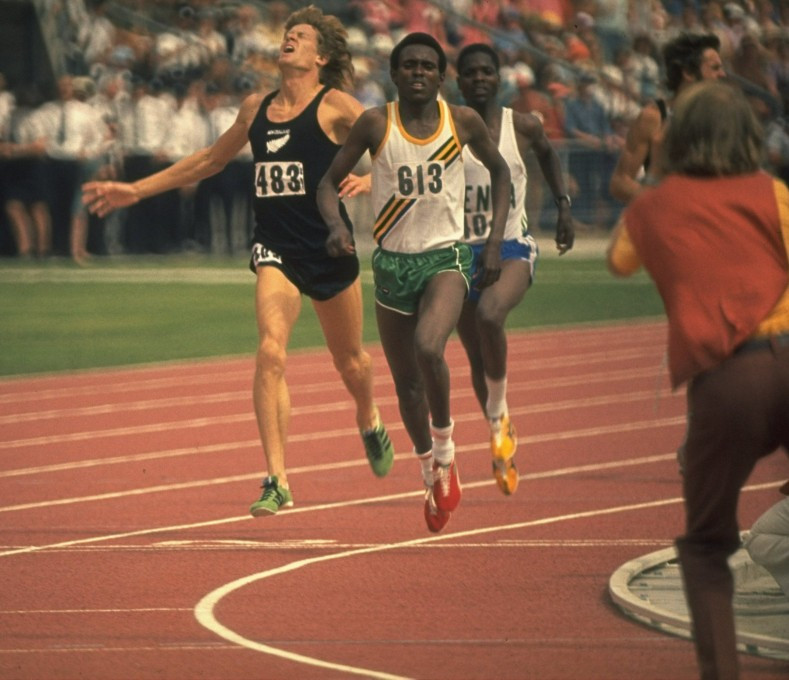 Athletics is always of a high standard at the Commonwealth Games but the programme at Christchurch 1974 was perhaps the best ever.

The meeting had burst into life on the opening day when Dick Tayler won gold for New Zealand in the 10,000 metres and continued with a series of world-class performances in the 800m, 5,000m, 3,000m steeplechase and marathon.

But it was nothing compared to what the 1,500m would produce. There was much anticipation about a field that included three Olympic medallists from Munich 1972 - New Zealand's Rod Dixon, bronze in the 1,500m, and Kenya's Ben Jipcho, silver in 3,000m steeplechase, and Mike Boit, bronze in the 800m. There was also England's Brendan Foster, winner of the bronze medal in the 1,500m at the Commonwealth Games in Edinburgh.

Then there was John Walker, who at 22 was the up-and-coming star of New Zealand athletics, and Filbert Bayi, who at 20 was largely an unknown young runner from Tanzania but had been talked about as a potential world-beater by those who had seen him.

Bayi's style was unique. He ran hard from the gun, trying to blow the opposition away. It was a style he had developed after being knocked out in the heats in the 1,500m and 3,000m steeplechase at the Olympics two years earlier, an experience the teenager did not enjoy. "I preferred to run that way after what happened at the Munich Olympics in 1972 when there was a lot of jostling and pushing. I thought then, 'Why not run in front by myself?'

"Your life is in danger when somebody spikes you. I thought the only way to avoid spiking was to run from the beginning in front of everybody. I think I caught some of the athletes with that because they thought I would get tired.

"They made a bad judgment. They said they'll get me next time but next time the same thing and I always say 'Follow me, catch me if you can'."

Walker had beaten Dixon in the New Zealand trials for Christchurch 1974 and there was great hope that he could produce something special in Christchurch. He had heard of how Bayi liked to run but remained confident. "I had never seen Bayi before," Walker admitted later. "I had heard about him and knew the way he ran but I didn't think he would do that in the final."

Bayi set off quickly and, at 800m, was 20 metres clear of the field. Walker moved closer on the third lap and looked set to challenge for the lead in the straight, but as soon as he was within a couple of strides, Bayi zoomed clear again off the final lap and was never going to be caught.  He stopped the clock at 3 min 32.2sec, breaking the world record set by American Jim Ryun in 1969. Walker was also inside Ryun's old record.

Remarkably, the runners in third, fourth and fifth also ran the fourth, fifth and seventh fastest 1,500m times to that date. Five national records were broken. Sir Roger Bannister, the Englishman who 20 years earlier had been the first runner to break four minutes for the mile, called it "the greatest race I have ever seen".

"It really was a surprise [to see Walker second] because I had not heard of him before," Bayi later admitted. "I said, 'Who is this guy who came behind me?'

"I looked back several times to see how far the guys were behind. I saw Walker closing the gap. That made me relax and wait for the big sprint.

"I looked back and saw people coming. And then I waited. And then John Walker came close to me - about three metres away - at 50 metres and then I just accelerated. I saw the finish line and thought, 'Nobody will catch me'."

"I am sure that sprint helped me to break the world record. Thanks to Walker who really pushed me to find last gear.

"I was so happy to win the gold, but when I looked at the screen and saw the screen flashing, 'world record' I was even happier. I jumped up and down while going for the victory lap."

It marked a dramatic shift in how middle-distance races at the top of the sport were run. "I changed the system of running," Bayi said many years later. "In those years before I broke the record, most of the athletes were running in the group, waiting for the last 200 metres and sprint.

"Think about the change that occurred in the 1,500m at Christchurch. The 1,500m was usually a slow race and then a sprint [at the finish]. But in 1974 I changed that from the beginning to the end. And not many people have thought about that."

Bayi had been born in the Rift Valley on the Tanzania side - a region renowned for producing some of the world's best runners. "My parents were farmers, cow herders," he said. "When I was a kid, I used to take care of the goats or cows," he explained. "And up there in the bush, you do hunting, running with the dog, running with the animals and running with the cows and all that, I think, made me build some stamina."

In 1961, at the age of six, Bayi started school. Its location was two miles away from where his family lived. "So every morning I had to run to school, then I had to go back for lunch. Then I had to go for afternoon classes. So you can imagine I ran about eight miles a day. That made a lot of stamina in my body."

Bayi and Walker continued their rivalry in 1975 when Bayi broke Ryun’s eight-year-old record for the mile, clocking 3:51.0 in Kingston in Jamaica. This record was short-lived, as Walker became history’s first sub-3:50 miler that August, running 3:49.4 at Gothenburg in Sweden.

The much-anticipated clash between the two runners at the 1976 Olympics failed to materialise in Montreal. Tanzania joined other African nations in boycotting the Games in protest against the All Blacks' rugby union tour of South Africa. Bayi would probably not have run anyway, as he was stricken with malaria shortly before the Olympics began. At Moscow four years later, Bayi won a silver medal in the 3,000m steeplechase.

It took five years, and Sebastian Coe, to break Bayi's world record but it still stands as the Commonwealth Games record. Coe, like every other subsequent runner who has broken the world record for the 1,500m, used pacemakers, something Bayi does not approve of.

"The person who wins the race is behind watching," he said. "They are assisted by others. I do not believe that is a real world record. The world record is when somebody uses all his effort and does it by himself."

Bayi, now 64, is currently in the Gold Coast for the 2018 Commonwealth Games as secretary general of the Tanzania Olympic Committee. Last week, at the Commonwealth Games General Assembly, he was honoured with a special lifetime achievement award.

Walker has been suffering from Parkinson's disease for more than 20 years but at the age of 66 remains active as a Councillor for Manukau City. In 2009, in the Queen's Birthday Honours List, Walker was appointed Knight Companion of the New Zealand Order of Merit. He is now officially called Sir John Walker. Earlier this month, a special statue was unveiled in Auckland commemorating the moment he crossed the line at Montreal in 1976 to win the Olympic gold medal in the 1,500m, the race that Bayi missed.

That race in Christchurch, though, remains one of the highlights of Walker's career.

"I didn't appreciate what we had done at the time. It was only afterwards once I started reading the press," he said. "We had just run one of the greatest foot races in history at a Commonwealth Games in little, old New Zealand. It was pretty phenomenal. Those Commonwealth Games were special. We will never see another one like it."