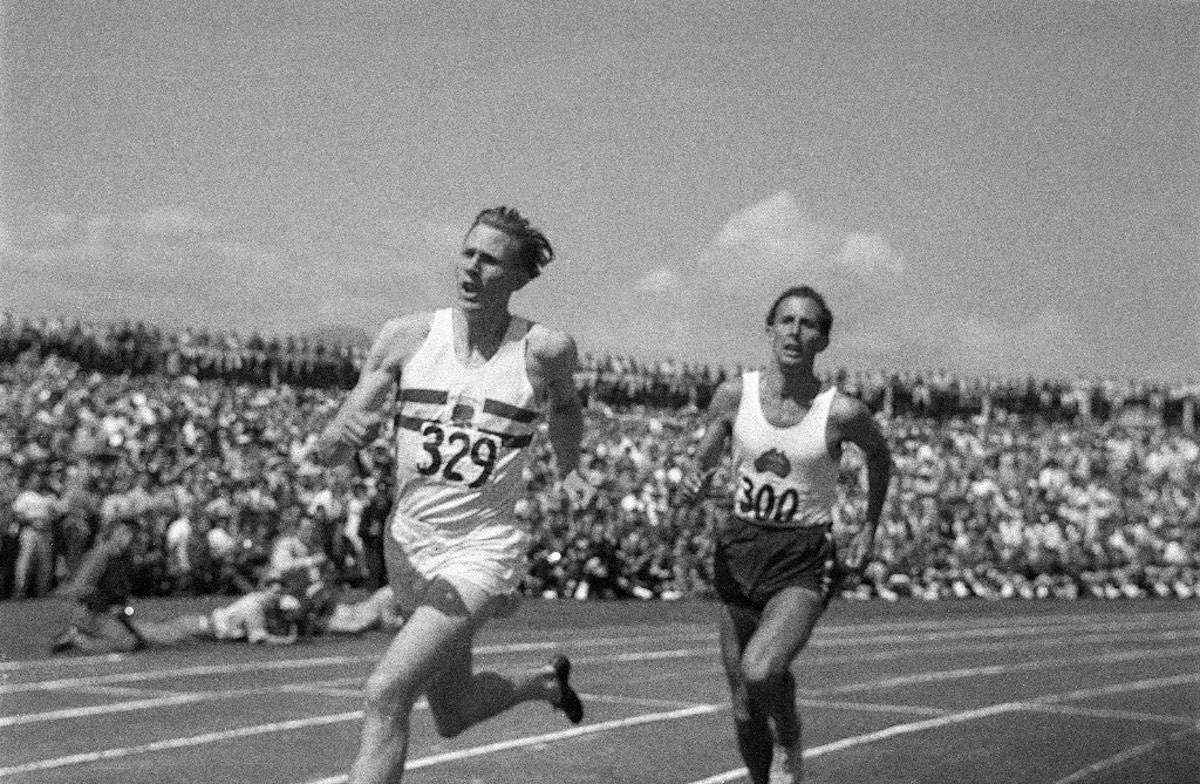 The build-up to the mile at the 1954 British Empire Games in Vancouver was more like a heavyweight world title fight than a running race.

Earlier in the year, England's Roger Bannister had become the first runner to break the four-minute mile, a performance that had captured the imagination of the world.

Bannister had run his incredible time at Oxford in May but the following month Australia's John Landy had smashed the world record when he ran 3:57.9 at a race in Turku in Finland.

So, the anticipation for the race between the two was huge. The press variously called it "The Mile of the Century" or "The Miracle Mile".

The focus of the world's media was on the two runners and they dealt with it in different ways. Bannister, a private person at the best of times, tried to avoid attention and prepare quietly. Landy, though, was happy to talk to anyone and train in public.

The two runners were just as different on the track as they were off it. Landy was happy to lead races from the gun, setting a fast pace that normally drained his rivals of energy and finishing speed. Bannister, on the other hand, had the ability to sprint hard at the end of races and sweep past his opponents.

On the eve of the opening heat, Bannister picked up a cold which left him coughing and sneezing. Landy also had problems, having suffered a badly gashed foot that required stitches having trodden on a photographer's flash bulb. He tried to keep the accident a secret, but it leaked when the doctor told a reporter about it. He has always refused to blame the incident for what happened later.

Landy received some assistance in the final from New Zealand's Murray Halberg and Bill Baillie, who started off fast, although the Australian was still not satisfied with their pace and by the end of the opening 440 yard lap had taken off at the front and had a gap of five yards with Bannister in second place before the crowd of 35,000 in the Empire Stadium

Landy continued to set a ferocious pace and at one point had a lead of nearly 15 yards before Bannister brought it back down to 10. "This was the moment when my confidence wavered," Bannister wrote later in this autobiography The First Four Minutes.

Bannister knew he had to close the gap. "I quickened my stride, trying at the same time to keep relaxed," he wrote in The First Four Minutes. "I was almost hypnotised by his [Landy] easy shuffling stride - the most clipped and economical I have ever seen. I tried to imagine myself attached to him by some invisible cord. With each stride I drew the cord tighter and reduced his lead."

Landy maintained his pace, running the third lap in 60.2sec, but Bannister clocked 59.3 and was gaining ground. Landy reached the bell in 2:58.4, with Bannister 0.6 behind. Landy accelerated again, though, and the gap began to stretch again. "As we entered the last bend, I tried to convince myself that he was tiring." Bannister wrote in The First Four Minutes.

Near the end, Landy had a look to see if he had done enough to hold off Bannister. Off the last bend, he glanced inside to look behind - at the same moment that Bannister came past on the outside. "I saw him glance inwards over his opposite shoulder," Bannister wrote in The First Four Minutes. "This tiny act of his held great significance and gave me confidence."

Landy's resistance was broken and Bannister crossed the line to win in 3:58.8. Landy was 0.8 seconds behind him. It was the first time two runners had broken four minutes for the mile in the same race. Bannister was exhausted and after crossing the line collapsed into the arms of officials.

"He is the sort of runner I could never become, and for this I admire him," Bannister later wrote of Landy in The First Four Minutes. "Before Vancouver he achieved a record of solo mile races that I could never have equalled. At Vancouver he had the courage to lead at the same speed in a closely competitive race. His boldness forced me to abandon my time schedule and lose myself quite completely in the struggle itself."

"I knew that more important than the four-minute mile, from the point of view of my career, was whether I could or could not defeat John Landy. The Empire Games in Vancouver were the important settling of the score. If I didn’t manage to defeat John Landy there, he would be the world record holder and have the right to be the best miler in the world.

Landy was asked after the race if he had gone off too fast and whether he could have won employing different tactics.

"I had no alternative," he said. "I had nobody to help me. I tried to run a lone-wolf race. If I couldn’t shake Roger off, I had to lose. When I looked around in the back straight and I saw he was with me, I knew it was curtains. It was a very good race. He just out-kicked me in those final 70 to 80 yards and that was all there was to it. I’m very pleased we were both able to break four minutes. It was a good clean race and it definitely went to the better man on the day."

In an interview three years ago with News Corp from his Melbourne home, the now 87-year-old Landy said: "The race really was a promoter’s dream. The four-minute mile was something that even people who weren’t interested in athletics could understand and this fascination had built up.

"Along the back straight, the sun was shining in such a way that the two shadows were clear and it looked as though I was pulling away. I thought I was about 15 metres in front.”

The photograph of Landy looking left while Bannister ran down the right was one of the landmark sporting images of the 20th century. A statue of the moment was erected outside Empire Stadium but has since been moved to outside the Pacific National Exhibition north entrance just metres from where the race took place at the new Empire Fields

Landy once likened it to Lot’s wife turning into a pillar of salt when she looked back in the Bible. But he denied he lost the race because of it.

"It wasn’t the reason at all," Landy said. "I ran the race the best I could on the day and he was the better runner. In the last 100 metres the lactic acid had set in to such an extent that I could do nothing but maintain my pace, and he was able to accelerate. I have no regrets about the way it was run. I had a lot of respect for Roger and he had a lot of respect for me."

Bannister, later knighted and who became known as Sir Roger, became an eminent neurologist who ran in his spare time. He died peacefully at home in March 2018.

"We run, not because we think it is doing us good, but because we enjoy it and cannot help ourselves," he once said. "The more restricted our society and work become, the more necessary it will be to find some outlet for this craving for freedom. No one can say, ‘You must not run faster than this, or jump higher than that’. The human spirit is indomitable."