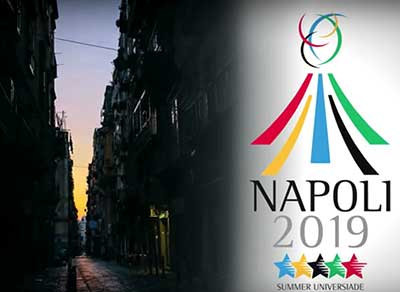 Organisers of the Naples 2019 Summer Universiade are running a campaign in an attempt to recruit 10,000 volunteers.

Starting today, the official website of the event will feature an online form where potential volunteers will be able to apply for spots.

The campaign is hoping to draw in volunteers to work in various aspects of the Universiade, such as at the Athletes' Village and as part of the delegation service.

The programme is open to Italian citizens who have turned 18 by April 2019 and are willing to work for at least five days during the event.

Naples 2019 have targeted Campania region universities and will be touring various higher education institutions in a bid to drive up applications.

This will include the University of Salerno, which contains the Baronissi Sports Campus where Universiade fencing competitions will be held.

Several Italian Universiade athletes, including Taipei 2017 archer Massimiliano Mandia, will be at the forefront of the recruitment campaign.

No deadline has so far been set with the registration process set to remain open until the 10,000 volunteers have been selected.

The slogan for the volunteer programme is "Join Us, Meet the World", a reference to the international nature of the event.

The International University Sports Federation gave a vote of confidence to organisers after an inspection visit this month.

The city has had limited time to prepare as they took over the hosting rights from Brasilia, which withdrew as the Universiade venue in January 2015.

The Brazilian capital was unable to meet financial commitments.