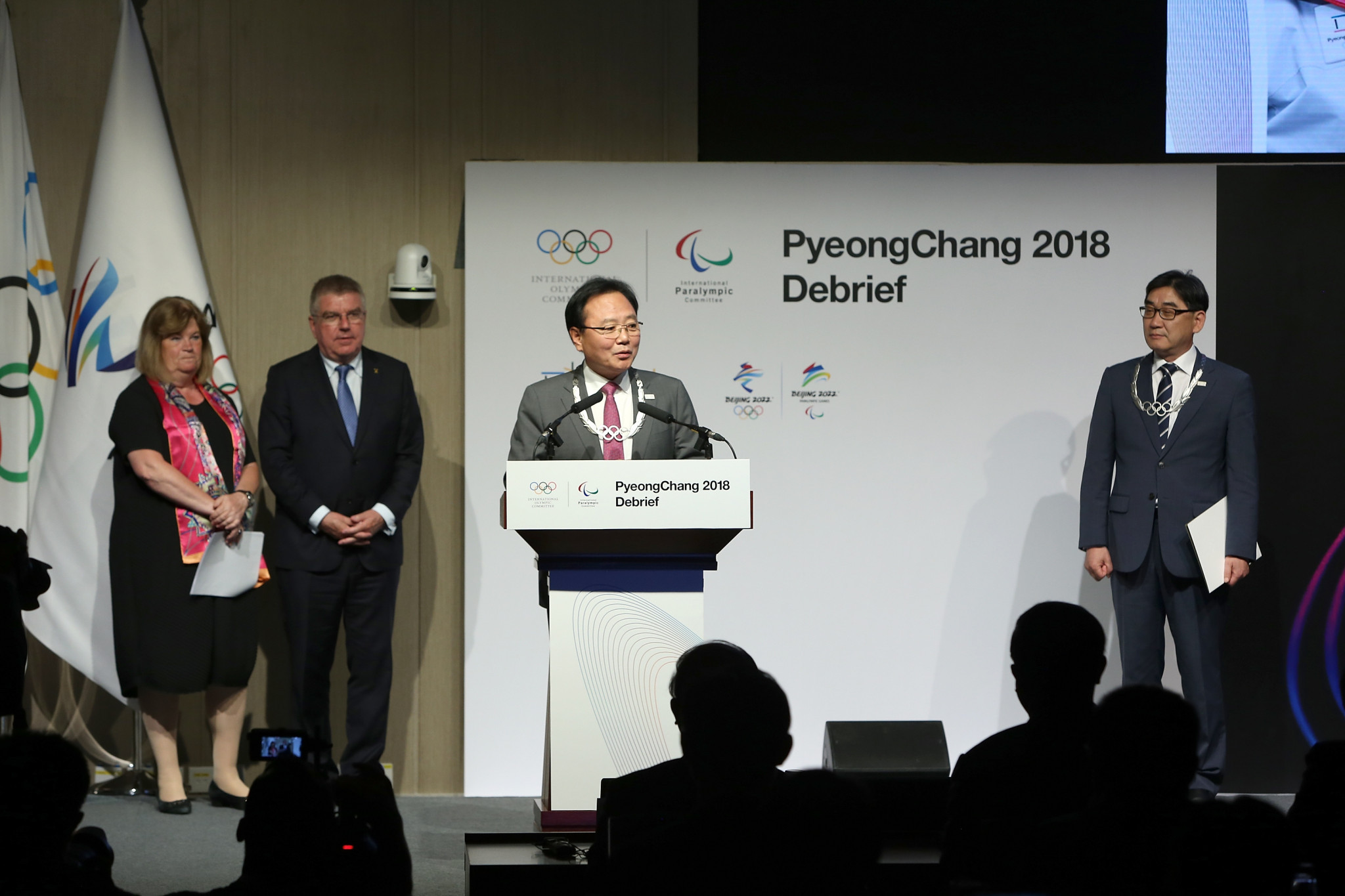 Kim Kihong and Baek Sungil, the vice-presidents of Games planning and Games operations for Pyeongchang 2018 respectively, have today been awarded the Olympic Order.

The award ceremony was held as part of the Pyeongchang 2018 de-brief taking place here this week in the city which is due to host the 2022 Winter Olympic and Paralympic Games.

Prior to that, Gunilla Lindberg, chair of the Pyeongchang 2018 IOC Coordination Commission, outlined the reasons why Kim and Baek had been given the Olympic Movement's highest individual accolade.

Speaking about Kim, Lindberg said: "For four years as vice-president of Games planning, Mr Kim Kihong was a key figure in delivering an outstanding edition of the Olympic Winter Games in the Republic of Korea.

"Working closely with President Lee Hee-beom, he devoted his time, effort and energy to the preparations for the Games.

"His years of service in the Ministry of Culture, Sports and Tourism, helped him to foster a strong cooperation with the department of authorities and related Ministries.

"He also took part in the inter-Korean, high-level talks, which resulted in the Olympic Korean Peninsula Declaration.

"The image of both delegations marching together as one, under the name Korea and behind one flag at the Pyeongchang 2018 Opening Ceremony will stay forever in the memory of millions of people."

Kim claimed Pyeongchang 2018 was his destiny and that the event was special because of the peace it brought to the Korean Peninsula.

In March, he was also awarded a Paralympic Order, the highest honour a person connected with the Paralympic Movement can receive.

Speaking about Baek, Lindberg said: "In two years as vice-president of Games operations, Mr Baek Sungil played an important part in the final key steps of the delivery of the Olympic Winter Games Pyeongchang 2018.

"There is no doubt that his 30 years or more of service in the Korean Olympic Committee helped him in his role to keep the first-ever Olympic Winter Games in Korea working in perfect transition.

"The fantastic competitions we observed over the two weeks of February, and the positive feedback from athletes, NOCs (National Olympic Committees) and IFs (International Federations), demonstrates how good the job he and all his team did for these Games.

"Mr Baek Sungil, your efficiency and leadership skills were highly appreciated by all those around you."

Baek dedicated his honour to all levels of Pyeongchang 2018 and all those devoted to the success of the Games.

In April, IOC President Bach claimed that Pyeongchang 2018 "opened the door" for the historic summit between the leaders of North and South Korea, which saw them reaffirm their commitment to "complete denuclearisation".

South Korean President Moon Jae-in and North Korea’s Supreme Leader Kim Jong-un pledged to gradually reduce weapons on both sides, and to push towards turning the armistice that ended the Korean War in 1953 into a peace treaty this year.

The summit, held in the truce village of Panmunjom, was only the third such meeting between the leaders of the North and South.

North and South Korea marched together under the unification flag at the Opening Ceremony of Pyeongchang 2018 and, for the first time in Olympic history, competed together as part of a unified Korean women's ice hockey team.

Bach claimed during February’s IOC Session that Pyeongchang 2018 has "brought real hope" to everybody in the Korean Peninsula by encouraging better relations between North and South.

In November of last year, the United Nations backed an Olympic Truce resolution to be observed during the Games, coming amid rising concerns following a series of missile tests by North Korea in the preceding months.