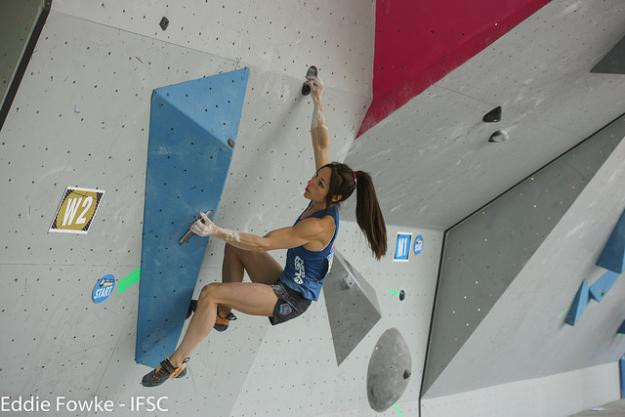 Alex Puccio energised the home crowd at the International Federation of Sport Climbing Bouldering World Cup in Vail, Colorado as she produced a grand finale to take her first gold since 2009.

The 28-year-old US climber from McKinney, also a Vail finalist in 2017, stayed in the running after Japan's Miho Nonaka had taken an early lead with a quick top of the W1 climb.

When the season's rankings leader Akiyo Noguchi, who had won the three previous World Cup events, and France's Fanny Gibert were unable to solve W4, Nonaka stood to win.

Unless, that was, Puccio was able to top in the event's final climbing attempt - and she achieved that to huge acclaim.

In the men's bouldering event, Japan's Rei Sugimoto came through to earn the second World Cup gold of his career.

Sugimoto, whose previous World Cup win came in 2013, was one of six Japanese athletes to qualify for the final along with three home climbers.

He secured victory with three tops from the four climbs.

His first top was matched by his team-mate Tomoa Narasaki, chasing Slovenia's Jerney Kruder at the top of Bouldering World Cup rankings, and Sean Bailey of the US.

Sugimoto and Bailey both topped on M2, and Narasaki matched his next top on M3.

Bailey had the opportunity to reclaim his position on the fourth and final climb, but fell with one hand on the final hold.

Narasaki also came up just short of the top, so Bailey finished second having completed two tops in one less attempt than him.

Kruder, meanwhile, finished fourth and goes into the final World Cup event in Munich on August 17 and 18 still leading the rankings with 400 points, four in front of Narasaki, with Ugimot moving up to third on 322.

Nonaka approaches the season’s finale with a five-point lead over Noguchi in the women's overall standings, 500 points to 495, with Gibert third on 305.